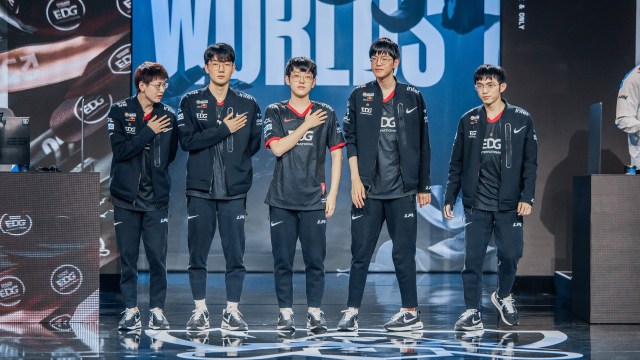 The final match of the League of Legends Worlds 2022 quarterfinals features two teams with variant prestige. The defending Worlds 2021 champions are taking on the League Champions Korea fourth seed in what seems like a mismatch on paper but with DRX playing like they have since they entered Worlds 2022, this match is set to be a banger.

Here is an in-depth preview showcasing how each team got to this point and what each team needs to do to win.

After barely even qualifying for Worlds 2022 to begin win, DRX were sent off to Mexico City to play in the play-in stage while being grouped up with the 2022 Mid-Season Invitational champions, Royal Never Give Up. They were expected to get out of the play-in stage but did one better by doing so with the one seed. Their reward was a spot in Group C in which they did enough against the overperforming Rogue and underperforming Top Esports to get out with the one seed once more.

For EDG, as the League Pro League third seed, they did not need to play in the play-in stage and as a result, automatically qualified for the group stage and drew into Group A alongside T1, Cloud9, and Fnatic. While they struggled against T1, EDG clean-swept C9 and Fnatic to get out of the group as the second seed.

How DRX can win

DRX should just be happy to be here based on their results in the LCK regional finals.

But with the team leveling up significantly since then, they actually have a real shot at winning this series. Their phenom mid laner Kim “Zeka” Geon-woo has been one of the best performers at Worlds 2022 and the stats track that. Zeka is the definitive carry for DRX and according to Oracleselixer.com, he leads all mid-laners in kills and is third overall just behind two bot laners.

To mix with the young Zeka, DRX has one of the oldest players in the professional play with Kim “Deft” Hyuk-kyu to bring a veteran presence. And for the supporting cast, Hwang “Kingen” Seong-hoon has played very well in the group stage as well putting up a top three KDA among top laners.

For this team to win, they are all going to have play at a level even above what they are playing at currently. While they match up well stylistically, they are facing an uphill battle, Zeka has an opportunity really early in his career to cement himself on the world stage. If he can answer the call, DRX could find themselves in the semifinals.

How EDG can win

On paper, this is an incredible mismatch.

EDG has the better players in every single lane and although DRX has Zeka, EDG has Lee “Scout” Ye-chan who has proven to be the better mid-laner even at their peaks. Essentially the only way EDG could lose this match is if they don’t show up. Unfortunately for them, the team hasn’t played the best in the group stage and to add to their woes, the team contracted Covid-19 in between the end of the group stage and now. While it seems like the team will be able to recover enough before this matchup, that lingering issues could impact the team’s performance.

But the team’s performances in best of fives are nothing short of legendary. Betting against this team is unwise. If the team can power through their recent struggles, this should be an easy win for the reigning world champs.