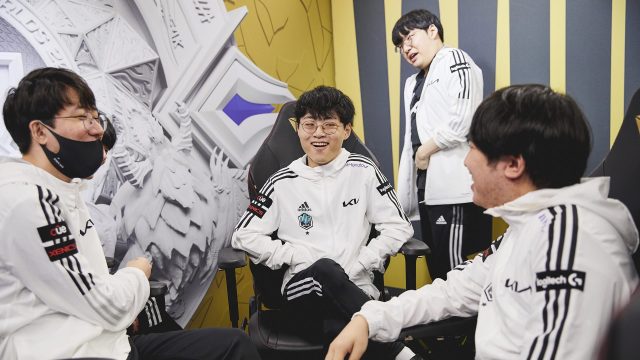 Welcome to our Worlds 2021 match ratings, as we enter the penultimate day of quarterfinals with a matchup between MAD Lions and DWG KIA. Every day, I, your designated guinea pig and critic, will watch all of the world championship games so you don’t have to. I will be here to dish out star ratings for every game and let you know if I recommend the slew of fights that day at Worlds.

Europe’s No. 1 seed has the misfortune of squaring up against the top team from South Korea and defending world champion in the quarterfinals Sunday. MAD Lions are known for their teamfighting prowess, but DWG KIA are a pretty heavy favorite not just in this matchup but for a Worlds 2021 title.

The winner of this one will move on to a semifinal tilt against T1, which means either a South Korean rivalry match with the Worlds 2021 finals in the balance or another chance for MAD Lions to be world-beaters at Worlds. Here’s a look at the series.

If you were to play this game up to the point where Norman Kaiser roams mid to assassinate Heo “ShowMaker” Su to make the gold relatively even, you could maybe make some sort of argument that the Lions could pull off his monumental upset.

Then, from once DWG secured Rift Herald while giving up almost nothing in the bottom lane, it was a canyon-sized gap in teamplay. From macro to skirmishes to individual heroics, it was a clean sweep for the reigning world champions as they look towards cementing a dynasty on the world championship stage.

This was the game for MAD Lions. It was the perfect early-game. They were proactive. They shut down all three lanes, got their Jayce ahead in the top lane and used Rift Herald to accrue a substantial gold leading heading out of the laning phase.

It was their game. The players were laughing and yelling in celebration on the cams, the European faithful were going wild on social media and every small mistake by DWG KIA was being punished.

DWG KIA kept chipping away, though, going even in teamfights that could have broken their base to collect some sizable bounties on the Lions. Those back-and-forth brawls led to the climactic battle, where an unmarked Kennen devoured a panicking Lions squad to tip the scales back over to DWG KIA after trailing from almost minute one.

And once they got the lead, it was over. DWG KIA moved to 8-0 on the tournament, and the Lions lost a game they will have nightmares about unless they can stage a comeback for the ages.

DWG KIA did their best MAD Lions Game 2 impression by getting a huge gold advantage in the laning phase before a few unforced errors caused some havoc.

The biggest difference between MAD in Game 2 and DWG KIA in Game 3 was evident. Whereas in Game 2 the Lions had trouble marking flanks and getting in a comfortable position to fight, once DWG KIA cleaned up their blunders in the mid-game, they punished the Europeans on their backstab attempts.

While it finishes a 3-0, it was a respectable showing from the European champions. They’re a great team, but against DWG KIA, who are chasing history and trying to secure a dynasty, they were outgunned and outmatched.