Will EDG face Gen.G or Cloud9 in the Worlds 2021 semifinals? 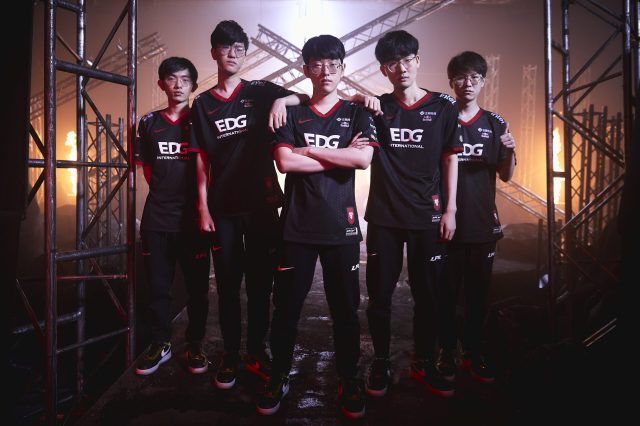 Edward Gaming defeated their League of Legends Pro League comrades in Royal Never Give Up 3-2 on Saturday in the 2021 League of Legends World Championship quarterfinals to make Worlds 2021 EDG’s first-ever trip to the semifinals.

This LPL summer finals rematch once again swung in favor of EDG, with Silver Scrapes to boot. Looking ahead, EDG will face either Cloud9 or Gen.G in the semifinals next week for a chance at extending their run at Worlds.

Upcomer’s staff came together after the series to discuss how the match lined up with our predictions, crown the day’s MVP and look ahead to Oct. 24’s series between DWG KIA and MAD Lions.

Let’s start with what’s next: Who’s your pick for Sunday’s matchup?

Nick Ray: Unfortunately for Tom, I think DWG KIA will take it over MAD Lions on Sunday. MAD Lions are an incredible team that finally hit their stride near the end of groups. We’ve been waiting to see them in best-of-fives, where they can show off their world-class teamfighting prowess, but I think it’s too little too late for the cubs.

DWG KIA are better across the board in three roles, and those roles happen to inhabit their entire top side. At the 2021 Mid-Season Invitational, a shaky DK were taken to five games by MAD; however, at Worlds 2021, DK are looking clean, especially Heo “Showmaker” Su and Kim “Khan” Dong-ha. They won’t be embarrassed by MAD on Sunday.

Warren Younger: DWG KIA are obviously the Worlds 2021 favorites at this point. Why wouldn’t they be? They are the reigning world champions, they went 6-0 in the group stage and they drew MAD Lions in the quarter finals. However, it’s that last part that should worry DK.

MAD Lions took this DK squad to five games at MSI and that was a MAD Lions team that made a hero run in the LEC playoffs. This MAD Lions team is better than their MSI version by a long shot. Sure you can say the same about DK but MAD Lions are hungry, they want it more, and they will take this series. Believe in the hopium!

Tom Matthiesen: I disagree with Warren’s notion that this MAD Lions version is stronger than the one we saw at MSI. Not only did they barely scrape by the group stage, they did so by relying on niche, suboptimal comfort picks. MAD Lions’ mental fortitude is as strong as it has always been, but the individual performances have been below expectations. The team performs better in best-of-fives, that much is true, though they’ll need to step it up drastically this time around.

DWG KIA, on the other hand, actually do look much stronger than they did at MSI. Their top side, as Nick highlighted, is clean. DWG KIA’s bot lane of Jang “Ghost” Yong-jun and Cho “BeryL” Geon-hee was a liability for the team in the past, but they’re holding down the fort admirably. The South Koreans are versatile in their playstyle and understand the game much better than their opponent.

Rashidat Jimoh: I am going to go against all odds and defy logic with a MAD Lions pick. Something in my gut just tells me that they can do it. Even though DK are the favorites to win Worlds 2021, this is a best-of-five series, and MAD have shown that if nothing else, they are good at teamfights.

Also, I know that both teams have changed since their last battle at MSI but that team fighting spirit still lives in MAD. If MAD can capitalize on DK’s less active bot lane and somehow convert that into an overall map advantage, then they can came out on top. While DK have a far better early game and more win conditions, if both teams are even late in the game, I favor MAD to come out on top

Did EDG vs. RNG meet your expectations?

Ray: First of all, I did not expect this series to go to five games. Perhaps I should’ve seen it coming, though, considering these two teams went the full distance the last time they faced off in the LPL summer finals. I had EDG winning 3-1,but I’ll take a 3-2 at Worlds any day. I just want them to break their top eight curse, but also think they bring a lot of firepower across the board. Top laner Li “Flandre” Xuan-Jun, mid laner Lee “Scout” Ye-chan, and bot laner Park “Viper” Do-hyeon have all had stellar showings at Worlds 2021. Once they settled on easier to execute comps, the series became much easier to play.

Younger: Yep, it went almost exactly how I thought it would. We got a five-game series and both teams traded blows. At the end of the day, RNG mid laner Yuan “Cryin” Cheng-Wei was the weak link, and although he had the spicy Annie pick, EDG did exactly what they needed to do to close out this Worlds 2021 rivalry matchup. I did expect each game to be closer, but the series overall was intense, until it wasn’t.

The series also came down to whether Flandre could contain Li “Xiaohu” Yuan-Hao, and he did that perfectly. Perhaps EDG’s next opponent will ban away the Graves. Ironically, people may think Flandre is a Graves one-trick, but he has one of the deepest champion pools of any player at Worlds 2021.

Matthiesen: The result was exactly what I predicted to happen, but the games itself didn’t play out as I had thought. Four of the five games did not feel particularly close, regardless of the winner, and we watched five relatively one-sided games. I most definitely did not expect Annie to be picked AND banned in the series.

That said, the team members we’re used to seeing pop off for their respective teams did show up Saturday. RNG sought advantages by getting Xiaohu ahead, and EDG played a bit more through the other lanes as well. I’m glad we got to witness LPL mayhem in the early games, but I had hoped for a bit more fireworks from the losing teams instead of them helplessly flopping around.

Jimoh: Yes it did even, though I predicted RNG would take only one game off EDG. Aside from that, everything went as I expected with RNG falling apart once they were unable to take early game advantages. The Annie pick was definitely a surprise, but EDG were smart in identifying that they needed to focus on Cryin’s champion pool to end the Worlds 2021 series in their favor.

Who was your EDG vs. RNG series MVP?

Ray: Can I pick two? I’m torn between EDG’s Flandre and Zhao “Jiejie” Li-Jie here, but I’m going to hand it to Flandre. Xiaohu is absolutely one of the, if not the strongest top laner in the LPL right now and despite plenty of target banning and pinching in draft, he was a rock for EDG the entire series.

Younger: Although I really want to hand it over to Flandre for being the catalyst for this series, I think it’s so important to note that Tian “Meiko”  Ye was able to pilot Yuumi in this meta. During the group stage one of the major strengths for the League of Legends Champions Korea reps was their ability to bring out and play Yuumi to amazing results. Everyone else tried to replicate their success and couldn’t utilize the champion well. Meiko showed up big time and showcased the power of Yuumi, which not only clamped down the series for EDG here but also it bodes well for a potential LPL vs. LCK showdown in the Worlds 2021 semis.

Matthiesen: Like Nick, I am having a tough time choosing between top laner Flandre and jungler Jiejie. But I’m going to side with the jungler in this case. As I mentioned before, most of the games weren’t particularly close. But the third game, at a 1-1 score, was a nail-biter. Jiejie, the absolute madman, walked up to RNG fighting Baron Nashor and stole it from right under their noses. And six minutes later, he did it again. Jiejie had nerves of steel, and though the overall performance of his teammates does not fall far behind, I have to honor the clutch factor.

Jimoh: I pick EDG’s jungler, Jiejie, because apart from Game 4 of the series, he had a really solid time on the Rift. Like Tom already noted, his double Baron steal in Game 3 was also crucial for EDG. After not having the best Smite record in the LPL playoffs, being able to step up on the Worlds stage deserves a round of applause.

Who do EDG have the best shot against in the Worlds 2021 semis?

Ray: I don’t think EDG are worried about whether they’re playing against Cloud9 or Gen.G. I would actually argue that Cloud9 might be a more difficult matchup. Across the board, Cloud9 have players that can perform better than EDG’s on an individual level, especially topside. I think EDG are hoping that Gen.G take care of Cloud9, as Gen.G haven’t looked nearly as good as their quarterfinals opponent in recent games.

Younger: I don’t think it makes a difference who EDG plays in the semifinals. Cloud9 and Gen.G are much weaker than EDG are. Cloud9 entered the knockout stage on a 2-4 record, and Gen.G had to play through a tiebreaker gauntlet to even get here in what many considered one of the weakest groups. With EDG’s win against RNG, they are probably already looking ahead to the Worlds 2021 finals, but if I had to pick one team for them to be wary of, C9 provide more of a fight.

Matthiesen: Nick and Warren have already explained it thoroughly, but EDG are probably not very stressed about either Gen.G or Cloud9. Both of these teams had to sweat to reach the quarterfinals and have clear weaknesses that EDG should be able to counter. Ultimately, Gen.G play better League of Legends overall, but I think that Cloud9 are more resilient. Cloud9 also seem like they would be more willing to experiment than Gen.G, which might catch EDG offguard. So, all things considered, I’d guess that EDG would have an easier time against Gen.G, but it’s by the slimmest of margins over Cloud9.

Jimoh: It’s quite tough to say because I don’t think EDG will mind facing either team. However, I would say from the series Saturday that Cloud9 could match EDG’s early game more so it would be Gen.G. Even though Gen.G finished top of their group, they have looked shaky throughout the tournament. Gen.G  have not really switched up their playstyle so far, either, and it would be better for EDG to play against the known than the unknown.