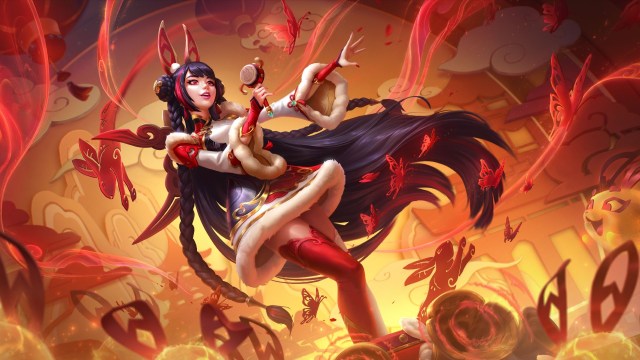 Provided by Riot Games Mythmaker Seraphine is an amazing looking skin but will only be available in Wild Rift.

It’s the holiday season for all of Riot Games’ titles and the company has already revealed its plans for League of Legends and Teamfight Tactics, with both games getting a ton of new content in the first update of the new year.

But there is one other game that is set to get a lot of new cosmetic options for players to enjoy: Riot Games’ mobile title League of Legends: Wild Rift will be getting a lot of new exclusive skins in their first update of 2023 which has players excited but has also made some gamers jealous.

Wild Rift has recently revealed its holiday-themed skins coming in the next update, with their own take on the Mythmaker skin line that League of Legends is also releasing in the first update of 2023 to celebrate the Lunar New Year.

i'm happy wild rift is getting these but can't help but feel jealous (i play wild rift too).considering it is year of the rabbit… the league skins r fine, i was just personally really excited for rabbit themed new years skins (year of the rabbit!) but league didn't get any 🙁

This is far from the first time that Wild Rift has received exclusive content as Riot has given the game many exclusive skins in an attempt to get more players to check out the game and reward players that have chosen Wild Rift as their main way to play League of Legends.

In fact, there are leaks for more exclusive skins on the horizon including PROJECT: Zeri, Super Villan Graves, and Glorious Crimson Nami, which is set to be a ranked rewards skin. The Zeri and Zoe skins are interesting as neither of those champions are actually in Wild Rift yet but are all but confirmed now.

There are nearly 100 different champions in Wild Rift currently, with Zeri and Zoe pushing the roster very close to the 100-champion milestone.