What are Hero Augments in TFT Set 8

What are Hero Augments in TFT Set 8 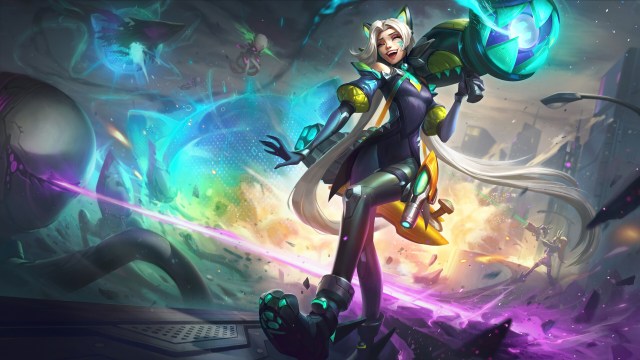 Provided by Riot Games In TFT Set 8, players can make Jinx into a superhero either by having her play support or carry.

It’s heroes versus villains time in Teamfight Tactics with the release of the eighth expansion, TFT: Monsters Attack! The new set brings a ton of new things into the game including units, traits, cosmetics and of course a brand-new mechanic. Hero Augments are brand new to TFT and give players a chance to live out their dreams by having their hyper carry turn into a superhero carry. Here is a quick explainer of how the mechanic works.

In TFT Set 8, Hero Augments can take the place of a regular augment which are offered to players throughout the game. These hero augments are different from the ones that players may be used to. To keep with the comic book theme, these augments will turn a regular unit into a superhero. That’s because these augments are tailor-made to each specific unit in the game. There are two Hero Augments for each unit with one being more supportive in nature and one allowing the unit to become a better carry. This is usually done by either giving the team a stat buff when the hero is on the board or upgrading their ability to do more in the damage or utility department.

Hero Augments may not show up in every game but if they do, every player in the game will get them at the same time. Hero Augments are an extension of the augment mechanic and will replace one of the augment selections that players receive throughout the game. For example, instead of a regular augment, Hero Augments may appear at Stage 2-1. But they will only be shown once so make sure to choose your hero wisely as you won’t get another opportunity.

When players select a Hero Augment they will receive a copy of that unit as well so they will be able to make use of their new superhero immediately.