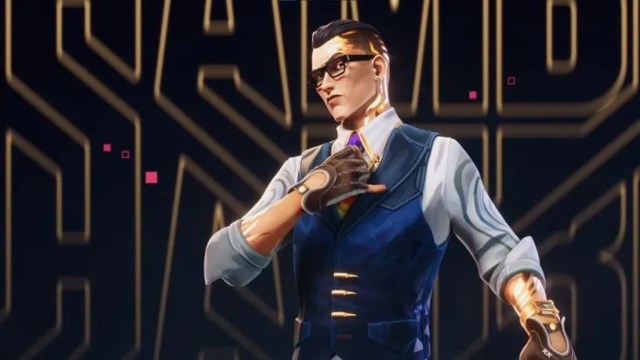 Provided by Riot Games. Chamber, an agent in VALORANT.

The next patch for VALORANT, patch 5.12, is highlighted by the big changes coming to popular agent Chamber. With significant parts of his kit getting nerfed in this patch, players are expecting a bit of a shake-up to the meta. Here is a full rundown of the upcoming Chamber changes in VALORANT patch 5.12.

Chamber's remained a dominant pick and we need to strike the right balance between preserving his identity and maintaining VALORANT’s game health. So we're making changes to most of his abilities in Patch 5.12. See our breakdown:https://t.co/6HaVTsPtJJ pic.twitter.com/imeyNG129O

Ever since his entry into the VALORANT agent pool, Chamber has almost always been regarded as one of the best agents available. This mainly has to do with his useful teleport, his powerful ultimate ability, and his overall versatility. The VALORANT balance team recognized this, alongside public and professional outcry.

Now there are some incoming changes that are meant to balance the agent roster.

Headhunter gets more inaccurate when spammed

One of his key abilities is Headhunter, an agent-specific Sheriff that fires faster. The key change coming to this ability is the aim when spamming. Essentially, this means that players who spam shots to get quick body-shot kills will have a harder time, as the aim will be harder to control if shot quickly.

As for Rendezvous, the Chamber teleport ability, it’s now one anchor only in this VALORANT patch. The radius from the one anchor now is 13 meters, as opposed to the 7.5 meters each individual anchor had beforehand. With this change, the team removed the need to be on the same vertical height as the anchor, now able to use it anywhere within the radius.

However, weapon draw time post-teleport is now slower, from 0.4 seconds to 0.7 seconds. The only weapon unaffected by this is his Headhunter. Now if the teleport anchor is destroyed, it is gone for the round instead of going on cooldown. The VALORANT team posted videos on their blog showing these changes since Rendezvous is such an important part of Chamber’s kit.

Trademarks are now weaker at a range

As for Trademark, the tripwire ability that slows enemies, it now functions similarly to Killjoy’s Alarm Bot. It now has a range that, if left, becomes inactive. Now, you can recall it mid-round, from any range without line-of-sight. When recalled, it takes 30 seconds to come back but will stay gone for the round if destroyed.

It takes longer to arm when placed, from 2 seconds to 4 seconds, but also has more health now, 20 instead of 1.

Last but not least for this Chamber patch, Tour de Force now shoots 57.5% slower than its old VALORANT version. It now is more similar to the Operator than before, where it shot much faster.

As for the Slows both Tour de Force and Trademark produce, that also is nerfed. Instead of lasting for 6 seconds, it now lasts 4 seconds.