Fans don't have to wait to watch more competitive VALORANT 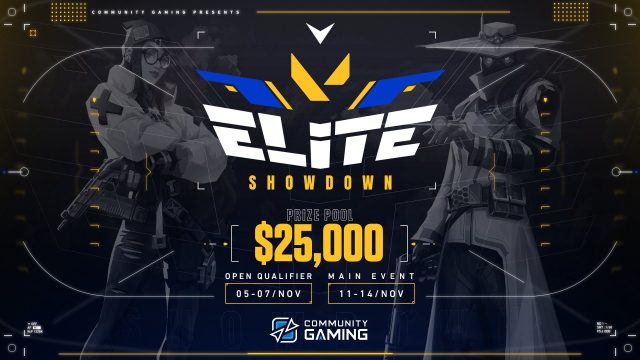 Provided by Community Gaming The Tournament will start open qualifiers on Nov. 5.

Announcing the $25,000 Valorant Elite Showdown Tournament in partnership with @valesports_na !

The open qualifier phase will feature 128 teams in a double-elimination bracket and will stop running matches once the top 32 teams are locked in. The 32 qualified teams will then be pitted against the field of invited teams in a GSL group stage single-elimination format. The eventual winner of the new tournament will take home $10,000 from the prize pool. According to Upcomer’s George Geddes, the tournament’s stream will also give away Riot Gun Buddies and will feature other Tier 2 teams like TSM Academy, SoaR and Teal Seam.

From what I've been told, this event will be giving away Riot Gun Buddies (yes, I'm serious), to viewers.

The tournament will also feature familiar faces on broadcast from the VCT circuit like Daniel “ddk” Kapadia, Tanner Metro and Christy “Ender” Frierson.

The VALORANT Elite Showdown Tournament leads up to Champs

After the delayed North American Last Chance Qualifier concludes at the end of Oct., the VCT slate for Nov. was completely empty. While Nerd Street Gamers have kept a healthy amount of tournaments running during VCT’s downtime, the lack of decent-sized prize pool tournaments for Tier 2 VALORANT teams have been few and far between. With this new tournament, teams like Renegades, who have had sparse showings on the VCT broadcasts and main events, will have something to strive for in the month-long break. Since VALORANT Champions starts on Dec. 5, most tournament organizers will not hold events like this at the same time, as to not lose viewership to the year-end tournament.

Fans of VALORANT can start watching the tournament, and wait to grab their Gun Buddy, with the main event starting on Nov. 11.

Update, 11/1 at 9:23 p.m. ET: Community Gaming has since said they will not be giving away any prizes, giveaways or staff gifts, as this claim was initially based on outdated information.