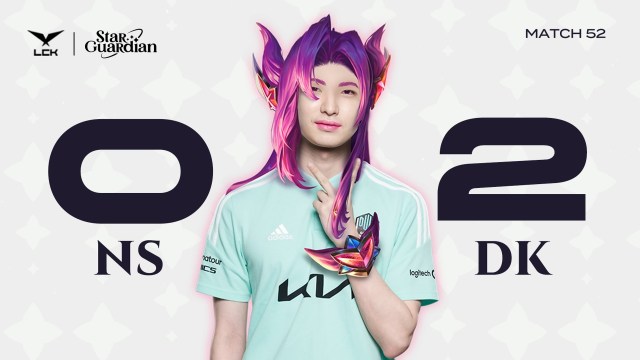 Provided by @LCK The scoreboard says that DK only won two games, but it was really three.

The 2022 League of Legends Champions Korea summer season is well underway, with games happening five days a week. For fans that don’t have time to watch all the action but want to know what is going on, we at Upcomer are here to provide a daily recap of each day’s games. Here is what happened Wednesday in the 2022 LCK summer season.

Fredit BRION came into their first match of Week 6 after a very successful Week 5 that saw them pick up their first series win the 2022 LCK Summer split. But don’t get it twisted; they still came into the match tied for last place as they went up against DRX, a team once thought to be a top-four contender that have slid down to the middle of the standings.

But despite BRO’s terrible record, they were the ones with momentum going into this series.

In Game 1, BRO showed momentum is a powerful tool. A hectic teamfight just a minute into the game in BRO’s jungle and before minions spawned, BRO already had a 1K gold lead as they got three kills on the board. With DRX so far behind from the start, BRO pushed their advantage and breezed past DRX after a 23-minute Dragon Soul. DRX had no chance in this one as BRO took Game 1 in just over 32 minutes.

Perfect package placement by Zeka delivers us to a game 3 of this series! #LCK pic.twitter.com/nnUCJmjLvX

Game 2 was much slower as the only thing that died before the seven-minute mark was a Dragon. But eventually, the kills did start pouring in for both DRX and BRO.

In fact, the first two kills of the game happened in rapid succession with both teams claiming one for themselves. Kills weren’t the only thing the two teams traded, though. With BRO stacking Dragons, DRX built their gold lead through farming and tower control.

With BRO threatening Dragon Soul, DRX made their first key move of the game with a teamfight win 24 minutes in, which allowed them stop the dragon stacking, take Baron and balloon their gold lead. One last team fight 31 minutes into the game wrapped up Game 2 for DRX.

BRO did not get discouraged at the start of Game 3 as they found first blood once again to gain some early confidence. Sixteen minutes in, BRO still held onto a lead in gold and kills.

But that lead would not last long.

After DRX mid laner Kim “Zeka” Geon-woo cleaned up a messy team fight 22 minutes in, DRX finally took control of the game and gold lead. Although the game lasted for almost 20 more minutes, DRX only grew their gold lead as the team methodically took away the map from BRO and pulled off the reverse sweep.

In the final series of Week 6 Day 1 of the 2022 LCK Summer split, controversy rose for the second week in a row.

DWG KIA did not waste much time in Game 1 as they erased the small lead Nongshim RedForce had quickly while jumping out to a 10-1 kill lead. In one of the faster games in the current state of the metagame, DK outclassed NS in just 29 minutes.

Game 2 was the point of controversy though. DK got out to an even bigger lead, and before the 20-minute mark, they already were up 7K gold and had a 12-3 advantage in kills. But just past the 18-minute mark, the game was paused. NS’s support player Lee “Effort” Sang-ho reported that his Flash summoner spell was not working correctly, which led to the officials to look into the matter.

The fix wasn’t just a minor one; the game was delayed for almost an hour before the league made an announcement. Due to how the Chronobreak system works, the game would have to be replayed.

According to an official announcement made by the LCK, “There was a plan to Chronobreak to before the bug occurs, but due to a Chronobreak system error the game cannot be restored back to the same game state.” Also, a game-ending bug cannot end in a victory or defeat for a team before the 20-minute mark regardless of the lead or advantage. So despite DK being 7K gold up at the time of the pause, both teams were forced to replay the match.

The pseudo Game 3 didn’t allow DK to jump out to as big of a lead. In fact, they were in for a drawn-out matchup. It took the team 37 minutes despite being in control nearly the entire time, but the result ended the same, in one of the longest two-game series in LCK history, DK pulled off the 2-0 sweep.

Week 6 of the 2022 LCK Summer split continues on Thursday with Day 2 featuring matchups between T1 and Kwangdong Freecs as well as Hanwha Life Esports going up against KT Rolster. Matches start at 4 a.m. ET live on the LCK Twitch channel.