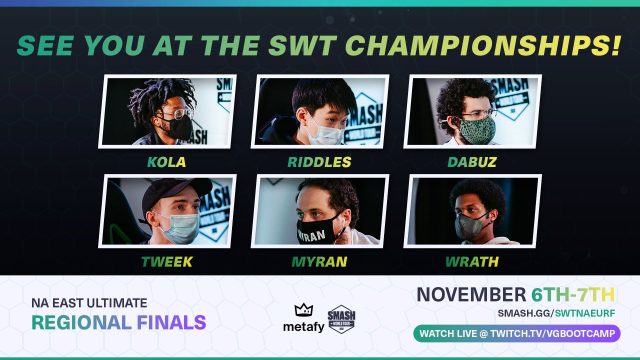 Provided by @SmashWorldTour via Twitter The top six players at this event all qualified for the global finals later this year.

Here are some of the biggest takeaways from the SWT NA East Ultimate Regional Finals.

Ever since the return of offline Smash events, Kola’s exact skill level has been hard to pin down. On the one hand, he’s finished in the top six of events like Glitch 8.5 and Super Smash Con: Fall Fest. Conversely, he’s also underperformed several times; most notably his 65th-place finish at Riptide. But, Kola made the crucial decision to lean on both Roy and Cloud at this tournament, rather than piloting just Roy. This decision helped him secure his biggest tournament win of the post-quarantine era.

Kola had a shaky start in the round-robin pools phase. While he defeated “Syrup” 3-1 and James “Rivers” Wade 3-0, he also suffered a 3-0 loss at the hands of Riddles. However, he started off strong in the main bracket against ESAM. Although ESAM won their previous set at Glitch 8.5, Kola returned the favor with a 3-1 victory at the SWT NA East Ultimate Regional Finals.

Afterward, Kola fought Robert “Myran” Herrin, who had qualified for the global finals, in large part due to his win over Tweek in pools. Kola used Cloud to steadily dismantle Myran, dropping only one game because he switched to Chrom before bringing back his Cloud in the next game. Kola’s next opponent was Riddles, the fighting game character specialist who had swept him in pools.

This time, Kola piloted Roy to a 3-1 victory. In their grand finals rematch, Kola won the first two games, then decided to try Cloud on Final Destination in Game 3. Although his Cloud picked up steam toward the end of the game, Riddles was still able to win Game 3, along with beating Kola’s Roy in Game 4. Nevertheless, Kola found the aggressive hits necessary to clutch out the set in Game 5 and win the tournament over Riddles.

Despite his status as the best Kazuya player in the world, Riddles has expressed his doubts about the character’s viability as a solo main. As a result, he opted to rely mostly on his tried-and-true Terry at the SWT NA East Ultimate Regional Finals. The decision paid off, as this event marked one of his best tournament performances to date.

Riddles used a mix of Kazuya and Terry to beat Rivers 3-1. However, he also suffered a 3-2 upset at the hands of Syrup while playing Kazuya. From that point on, Riddles played exclusively as Terry for the rest of the tournament. His Terry earned him early success in pools, helping him 3-0 Kola and finish first in the pool.

In the main bracket, Riddles faced Dabuz, whom he had previously beaten with Richter at his breakout tournament, Super Smash Con 2019. While the match-up changed, the result did not, as Riddles’ Terry defeated Dabuz’s Min Min in a five-game set. Riddles then earned a commanding 3-0 victory over Tweek’s Donkey Kong.

After his first loss to Kola, Riddles was pitted against Dabuz yet again in losers finals. Dabuz tried out his Rosalina and Luma, but the result was still unchanged. Riddles walked away with another 3-2 victory, giving him a lifetime 3-0 offline record against Dabuz. Ultimately, Riddles barely fell short in his rematch against Kola and finished in second place.

Thank you for your support! pic.twitter.com/5MXLBrNtIg

While Kola was the star of the SWT NA East Ultimate Regional Finals, he was not the only representative from Georgia to put on a show. Both Carrington “Wrath” Osborne and Cameron “Vendetta” Garrett earned big wins and made it into top eight.

Wrath’s start to the tournament was not particularly promising. He was placed in the most stacked round-robin pool and suffered losses to ESAM, Dabuz and David “LeoN” Leon as a result. Top 16 brought him a comparatively easier bracket, as he eliminated Syrup and Luke “KirbyKid” Richmond with a pair of 3-1 victories.

However, Wrath’s global finals qualifier match was against ESAM, who had defeated him 3-0 in pools. He seemed poised for another crushing defeat after losing the first two games. But, he managed to claw back and force ESAM to Game 5. There, ESAM went for an offstage Thunder combo that he expected would kill Wrath. However, because Sonic’s air dodge comes out one frame faster than the majority of the cast, the Thunder missed and ESAM self-destructed, giving Wrath the victory. From there, Wrath lost 3-1 to Tweek to finish in fifth place.

Unlike Wrath, Vendetta was the benefactor of a relatively easy pool. He finished first in his pool, beating John “Armadillo” V. and KirbyKid while losing to Noah “naitosharp” McCulley. Though Vendetta lost to Tweek in winners quarters, his Ken then carried him to a convincing 3-0 victory over LeoN.

Vendetta’s qualifier set was against Dabuz. Though the odds were against him, Vendetta was poised for victory, going up 2-1 and barely missing a Shoryuken kill confirm in Game 4. However, Dabuz ended up winning Game 4. After Dabuz took a huge lead in Game 5, Vendetta forfeited his final stock. Though he failed to earn a spot at the SWT Championship, Vendetta’s seventh-place finish still showed that he is a national-level tournament threat.

Overall, I placed 7th at the SWT Regionals defeating LeoN, KirbyKid and Armadillo. I was a confirm away from beating Dabuz and qualifying. Lost game 5. This was my first oor Ultimate tourney and I'd say this is the greatest accomplishment in my entire smash career. Best Ken?

The following six players have qualified for the Super Smash Bros. Ultimate finals at the SWT Championships in Dec.:

The Smash World Tour will continue from Nov. 12-14 with both the Oceania Ultimate and Melee Regional Finals.