The game’s first offline champion has been decided 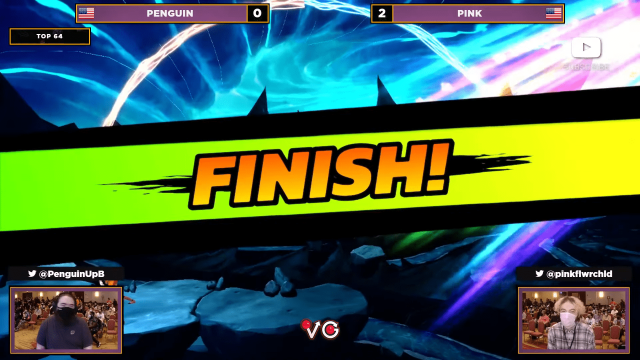 Provided by VGBootCamp via YouTube Pink demolishes Penguin to qualify for winners side of top eight.

Before the completion of the Super Smash Bros. Melee and Ultimate events at Super Smash Con: Fall Fest, the biggest winner was already crowned. Thanks to Game Mill Entertainment and Metafy, Nickelodeon All-Star Brawl boasted a higher prize pool than any of the tournament’s Smash brackets.

Though the first two weeks of NASB’s existence have already been full of online competitions, Super Smash Con: Fall Fest introduced the game’s first offline champion. The bracket featured a plethora of prominent Super Smash Bros. players, but the victor was Joshua “pink” L., a player who previously had little notoriety within the Smash community.

Pink’s run through top 64 included a 3-0 win over Tristan “Axon” W. and a 3-1 win over Pedro “Kurama” Alonso. Then, in winners quarters, pink played an Aang ditto against Ethan “Penguin” Drake, one of the best Rivals of Aether players in the world. He demolished Penguin, dropping only one stock throughout the entire set. Thus, pink won 3-0 and advanced into top eight on winners side.

From there, pink defeated Manny “Pancake mix.” Rivera 3-1 and went up 2-0 against Tyler “mirrorman” Morgan in winners finals. However, mirrorman put SpongeBob’s explosive punish game to work in order to reverse 3-0 him. Nevertheless, pink earned a rematch against mirrorman after eliminating Pancake mix. 3-0 in losers finals. He showed off Aang’s oppressive neutral-air loops throughout grand finals and ultimately beat mirrorman 3-1 in both sets to win the tournament.

you'll see more from me

Mirrorman proves to be an unexpected multi-game extraordinaire

Many of the most successful NASB players thus far are also top players in other platform fighting games. However, mirrorman took this trend a step further at Super Smash Con: Fall Fest NASB Singles, placing second despite coming from a completely different esports genre. He is a member of froyotech, one of the most successful Team Fortress 2 teams of all time.

Mirrorman cruised through the majority of the tournament without dropping any games. He swept Dakota “dakcity” L., John “Axiom XL” Smith and “Mj” to secure a spot in top eight. There, mirrorman earned another 3-0 victory over the tournament’s No. 1 seed, Luke “KirbyKid” Richmond.

He finally dropped his first games of the tournament against pink in winners finals. Even then, he pulled off a reverse sweep to land in grand finals on the winners side. Grand finals fittingly pitted mirrorman’s SpongeBob against pink’s Aang, showcasing two of Nickelodeon’s most iconic characters. Though pink came out on top, mirrorman still showed off his ability to excel at two very different esports at a high level.

Got super close to taking it all, some of the most fun I've had playing games in my life. Ggs 🙂

Pancake mix. can master a character in a day

One day before the beginning of the NASB bracket at Super Smash Con: Fall Fest, Michael “Nintendude” Brancato announced the tournament had banned Michelangelo. The admin did this because of his inescapable up throw to neutral-air loops and his ability to infinitely stall offstage with his down special, a glitch that had been patched out of the PC version of the game but not the Switch version. This decision presented a major challenge to Pancake mix., the No. 2 seed and a Michelangelo main.

Nevertheless, Pancake mix. quickly picked up Oblina and proved he could use her at a high level after only one day of practice. His road to top eight included victories against Grayson “Grayson” Ramos, Carter “Sloth” Reidelbach and Benjamin “Barking_Frog” K.

After losing to pink in winners semis, Pancake mix. then faced Tyler “Marss” Martins. He won convincingly, dropping only a single game because he switched from Oblina to Korra. Next, he fought Cody “C.Falcon” Falcon, who eliminated fellow Louisianan KirbyKid one round prior. Pancake mix. set the pace with a flawless JV4 in Game 1. He ultimately defeated C.Falcon 3-1 before losing to pink again for third place.

3rd place out of 200 at smash con with no Mikey and one day to find a character. Happy with my placement and glad I was able to not buster out too hard. Can’t wait for the new patch! So excited to learn new stuff and lab Mikey changes 🙂 GG’s everyone! I hope you guys enjoyed.