Which team will go down as the best of all time? 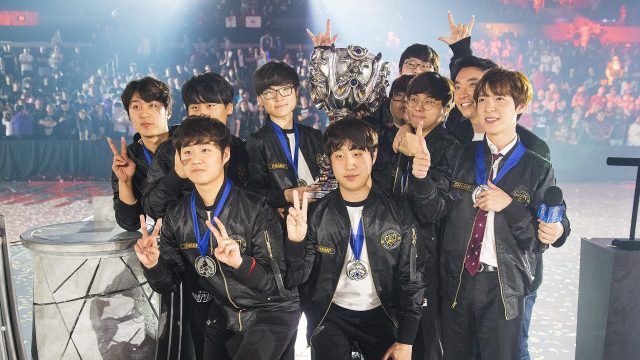 Provided by Riot Games SKT T1 were named the No. 1 League of Legends world champions of all time by those who voted

Before No. 11 is crowned, though, we posed a question to the community-at-large — how would you rank all the League of Legends champions that came before Saturday’s victor? After a few days of voting, more than 1,200 participants filled out the survey, grading each previous winner from 1 (least) to 10 (most) based on their legacy and greatness as a world champion.

While Fnatic are an iconic franchise with an illustrious history throughout the 11 years of the League of Legends World Championship, their title-winning team still has the stigma of winning the “beta” version of the event. There were no South Korean or Chinese teams attending the tournament, and as the rest of this ranking will show, those two regions stand a level (or two) above the rest of the pack on the international hierarchy chart.

But hey, regardless if they’re considered the least relevant or worst world champions in history, Riot Games still recognizes them as world champions. In 2021, though, Maciej “Shushei” Ratuszniak would probably be fined for not wearing a shirt during the closing ceremony.

Alright, I could maybe understand the Fnatic slander and all with them not playing any South Korean or Chinese teams, but the Taipei Assassins?

For the first team to ever hoist the Summoner’s Cup, the voters either never watched TPA live, don’t remember them fondly or have no idea who they are by how lowly they ranked across the board. The Assassins became icons in Taiwan following their victory over Korea’s Azubu Frost in the finals. They were also the first club to receive unique skins inside the game, celebrating their conquest in the world championship.

Fly, phoenix, fly — right into the No. 8 spot in our ranking. Kim “Doinb” Tae-sang became a megastar at the event with his unorthodox playstyle and energetic personality.

You have to wonder if the 2021 collapse of the same organization at the world championship (with four intact starters) impacted how the fans look back at FPX’s flight in 2019. While the team had a rocky start to the tournament, losing their first game to J Team, they came alive in the playoffs en-route to a 3-0 walloping of G2 Esports in the final.

Samsung Galaxy were the team that ended the SK Telecom T1 dynasty.

On the verge of a three-peat and in front of the recorded, largest, paid audience in esports history (50,000) at the Bird’s Nest in Beijing, China, T1 were neutralized and dispatched in a 3-0 sweep by their South Korean rivals.

Lee “Faker” Sang-hyeok had the best individual performances of his legendary career at the tournament, yet it was Lee “Crown” Min-ho’s Malzahar that shut down the greatest of all time in the final to secure Samsung Galaxy the Summoner’s Cup.

In a tournament dictated by skirmishes and early advantages snowballed into victories, there was no one better than Invictus Gaming.

Off the back of their invincible solo lane duo of Song “Rookie” Eui-jin and Kang “TheShy” Seung-lok, iG steamrolled the field after dispatching their toughest competition, KT Rolster, in the first round of the playoffs.

In the semifinals and finals against Europe’s tandem of G2 Esports and Fnatic, the Chinese representatives slam-dunked on their foes like they were playing in a pick-up game for fun. Rookie and TheShy took turns ankle-breaking everyone they played in the tournament, especially in the latter rounds once only Western teams stood in their way from a world title.

The 2013 tournament was the beginning of an era, not only for Faker and SKT but the South Korean as a whole.

After losing to TPA in the 2012 edition, South Korea returned with a supernova rookie team led by a teenager called Faker looking to make his mark on the international stage. While SKT didn’t crush teams as they would in subsequent world championship tournaments, almost losing to NaJin Black Sword in the semifinals, they came through in the clutch.

In the final, it was more of a coronation than a fight, with SKT running through China’s Royal Club in a quick 3-0 to win South Korea’s first (of many) world titles.

I can let other selections slide, but I am disappointed that somehow Samsung White only finished fourth in this ranking. I had to recheck the scores multiple times to ensure that this was correct, and it somehow was.

Samsung White were a juggernaut that choked out opponents through excellent vision control and made Summoner’s Rift a haunted house for the opposing team to clear out. They were on another level at Worlds 2014, sweeping through the group stage before dancing around teams in the playoffs like they already knew the result of the tournament.

In the most-anticipated match against their sister team Samsung Blue, SSW played at their full strength, without any playful drafts, and stomped their closest competition into the ground without breaking a sweat.

I would personally rank Samsung White as the No. 1 team, but the voters disagreed. Long live Samsung White, the dynasty that never was due to the South Korean exodus in the proceeding offseason, where all five starting members left for larger contracts in China.

Our most-recent world champion, Damwon Gaming, comes in at the bronze medal position in our ranking.

The franchise will look to add a second Summoner’s Cup to their collection and solidify a dynasty on Saturday when they take on EDG in the grand final.

For the 2020 iteration of the team, though, they were terrifying in their own right, only dropping three games on their way to the Cup. Carry junglers dictated the event, and no team had anyone remotely close to standing up next to Finals MVP Kim “Canyon” Geon-bu.

The 2016 SKT T1 team will always be remembered for their titanic clash with rival ROX Tigers in the semifinals at Madison Square Garden in New York City. Still regarded to this day as the best match in League of Legends, ever, SKT fought back from a 1-2 hole to put to rest who would go down as their greatest adversary.

What’s often forgotten, though, is that SKT didn’t have a cakewalk in the final. Instead, Samsung Galaxy pushed the reigning champions to the limit and gave us the only fifth game in League of Legends World Championship finals history. In the end, it was SKT that prevailed, setting up for Samsung’s revenge the proceeding year.

Could it be anyone else (especially after how SSW were treated)?

The 2015 SKT T1 squad went through the tournament by only dropping a single map, that coming during the third game of the grand finals versus the KOO Tigers. Following that loss, Faker and co. quieted a crowd urging on the Tigers to pull off the upset, rampaging through them to gain the organization their second Summoner’s Cup. Jang “MaRin” Gyeong-hwan was on another level during the tournament, and with the team’s overall versatility and raw firepower, no one in the field stood a chance of giving them a real fight for the top prize.

It’s going to take a truly incredible run from a team to usurp 2015 SKT’s place atop of these rankings in the minds of the fans.