The best VALORANT knife skins from 2022

The best VALORANT knife skins from 2022

Here are the best cosmetic melees in VALORANT from 2022 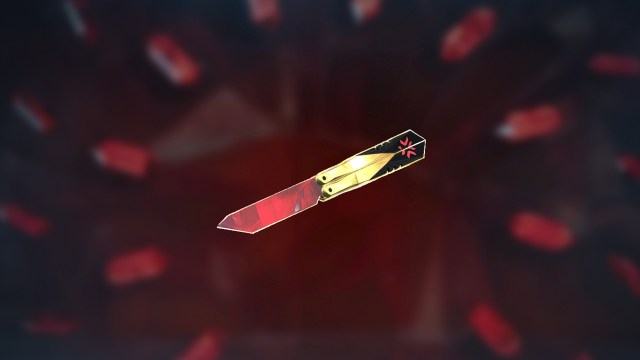 In VALORANT, knife skins are the best way to show off cosmetics in-game. While only limited to this recent year, the skin team at VALORANT didn’t skimp when it came to flashy designs.

In no particular order, here are some of the best knife skins released in 2022.

To start, let’s go with one of the most unique knife skins from 2022; only available from the Champions 2022 bundle. This knife, while a traditional butterfly knife, has three hidden features to it. When you inspect it, along with twirling the knife, you hold the Champions trophy. Secondly, if you are atop the game in kills, you have a golden glow for both this knife and your Champions 2022 Phantom skin.

Last but not least, for every five kills you get in a game, the knife gets small ruby-like pieces attached to the knife. At 25 kills, the knife becomes fully ruby red. For all those unique features and a clean look, the Champions 2022 knife is one of the best in 2022.

Another top knife from 2022, another butterfly knife. The RGX design came into VALORANT with a lot of hype, so when the RGX 2.0 skins came out alongside a new melee skin, fans were excited. Luckily enough, the melee skin lived up to the hype, with one of the best inspect animations in the game.

The way you can twirl the knife and go through the colors like every RGX skin but much faster is very pleasing to see.

Earlier in 2022, one of the most underrated skin bundles included one of the best melee skins of the year. Gaia’s Vengeance with its handaxe melee has always looked pleasing to the eye, along with its entire bundle.

The animations fit with the nature theme, and the smooth feel of it lends to the cosmetic nature of melee skins.

As the second of three 2.0 skins in this list, the Ion 2.0 Karambit is another great Karambit skin. This particular one is a nice mix of the white and futuristic look Ion gives while also having the flashy animations of a Karambit skin.

Nothing more to say, other than it is trumped by the next skin on this list.

As the final skin on this list, the Reaver 2.0 Karambit is the edgy version of the Ion 2.0 Karambit, but in the best of ways. The darkness really lends to the animations, especially with the colorful trails that the knife leaves behind as you swoosh it around.

In general, both Reaver bundles have some of the best knife skins in VALORANT, and the Reaver 2.0 Karambit is one of them for 2022.