A powerhouse of a sniper 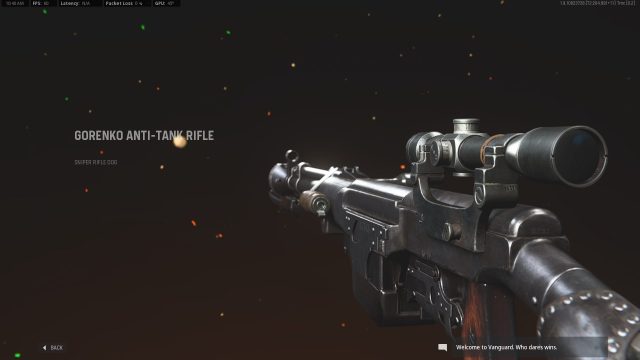 Provided by Activision The gun model for the Gorenko Anti-Tank Rifle in Call of Duty: Vanguard.

With the World Series of Warzone quickly approaching, viewers have seen some intriguing weapon options by participants. In the recent qualifiers for the event, some streamers pulled out weapons that hadn’t been prominently featured in the meta for some time. The Gorenko Anti-Tank Rifle was one such weapon that viewers saw Warzone players equip and have some success with. Naturally, this prompted fans to ask what loadout the Warzone streamers were running on this particular sniper.

While the Gorenko Anti-Tank Rifle is one of the most powerful weapons in all of Warzone, it has some significant downsides that have kept it out of the sniper meta. For starters, the gun is extremely slow, both in terms of movement speed and overall mobility (ADS, sprint-to-fire time, etc.). However, if players can find a way to deal with those negative aspects of the gun, it can be a devastating primary weapon to pull out on Caldera. Luckily, there are a few attachments that allow players to use the Gorenko effectively.

To see the full loadout for the Gorenko Anti-Tank Rifle in Warzone Season 5, keep reading below.

Unlike other snipers, the Gorenko is a semi-automatic weapon, meaning players can fire one shot after the other without any downtime. This makes the sniper somewhat of a threat in close range if players are in a pinch. Of course, most of the time, players should keep a solid distance between their enemies when using the powerful sniper.

If players can pair the Gorenko with a strong submachine gun on their loadout in Warzone, they have a terrific way of dealing with enemies at both close and far ranges.