Still the top sniper in Season 5 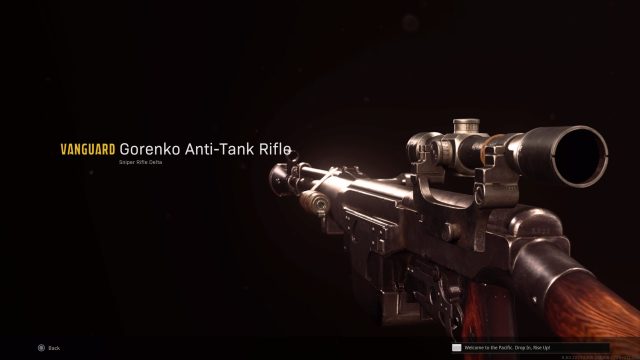 Provided by Activision The gun model for the Gorenko Anti-Tank Rifle in Call of Duty: Warzone.

Ever since the World Series of Warzone took place, the Gorenko Anti-Tank Rifle has been the most popular sniper rifle in Call of Duty: Warzone.

Pro players used this powerful sniper to their fullest advantage, downing opponents with one-taps to the head. Players around the community took notice and immediately began using the sniper in their matches. As a result, many players need to know what the best loadout for the Gorenko Anti-Tank Rifle is in Warzone. With Warzone 2 on the horizon, it’s likely that this loadout remains strong for quite some time.

The Gorenko Anti-Tank Rifle is a shockingly powerful semi-automatic sniper rifle that can absolutely obliterate opponents at any range. However, this power comes at a cost of mobility, which the recommended loadout doesn’t even attempt to improve. This loadout is all about maximizing the strength of the Gorenko, which is its damage.

As players can see, mobility is non-existent with this loadout. Instead, the loadout increases the sniper’s high recoil control using the Stippled Grip, Bipod, and Reinforced Stock. Then, bullet velocity is boosted with the Mercury Silencer and 420mm Empress barrel.

Finally, the FMJ Rounds are in place to make full use of the Gorenko’s damage. If players use the Combat Scout perk with this attachment, they can see enemies through walls and decimate them with FMJ’s boosted bullet penetration. Players can use this in conjunction with the 12mm AM 7 Round Mags to get off multiple shots before needing to reload.

This Gorenko Anti-Tank Rifle loadout is still the top option for snipers in Warzone Season 5.