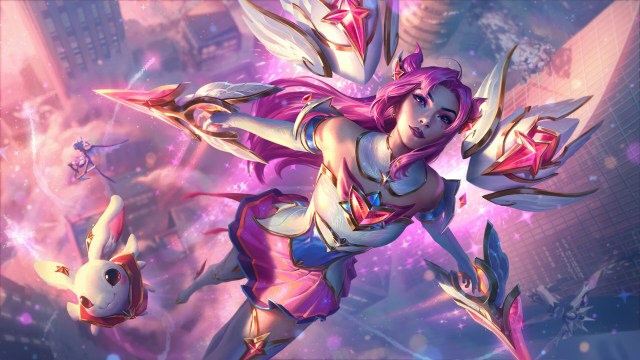 With the new Teamfight Tactics expansion hitting live servers this week, Upcomer’s TFT expert has been grinding away on the Public Beta Environment to bring players a quick guide on what team compositions are the best. Here is a look at the three best TFT Set 8 comps for players to use so they can hit the ground running and climb quickly.

Every set has a premier three-cost reroll composition that just has the perfect storm of champions and synergies going for it. In TFT Set 8, Monsters Attack! that comp is definitely Recon reroll. The composition has two main carries with Kai’Sa and Vayne. Both champions have the Recon synergy which gives them extra crit damage but also the unique ability to dash to safety whenever they cast a spell in front of an enemy champion. This makes sure that they can finish enemies off even if they get jumped on. But the reason why these two champions work so well is that one specializes in magic damage while the other is physical. Mixed damage is vital in TFT as it effectively deals with every type of frontline. The supporting cast is also very good here as well giving a good mix of utility and tankiness.

If Reroll comps are not your thing, there’s still a very powerful and user-friendly front-to-back composition that will definitely be one of the best comps in TFT Set 8. This comp is a lot like old-school Ranger Knight comps back in Set 1.

Essentially, this comp looks to have four Sureshot champions in the back and four tanks in the front. With the tanks in this set being flexible, players can choose to run Aegis, Defender or Brawlers for the frontline. The main stars of the show are the Sureshot champions though and specifically, Samira. Samira is the premier attack damage carry in the four-cost slot as she comes with the Ace trait which executes enemies below a max health percentage threshold. This comp also scales very nicely into the late game as the five-cost champion, Aphelios is also a Sureshot and can be used as a main carry or utility thanks to his Arsenal trait.

And finally, there is the top magic damage comp in the game, Taliyah Spellslinger. Taliyah joins a list of powerful four-cost magic damage dealers that specialize in AoE damage that fires in a straight line. Taliyah’s spell works a little bit differently though as its main damage is delayed a bit after the initial cast but don’t get it twisted, it still packs a serious punch. With the right items, Taliyah can assassinate any opposing backline before they even get their abilities off which is the primary reason why she is feared. The Spellslinger supporting cast gives her more damage to make sure she can finish off foes that are barely hanging on.