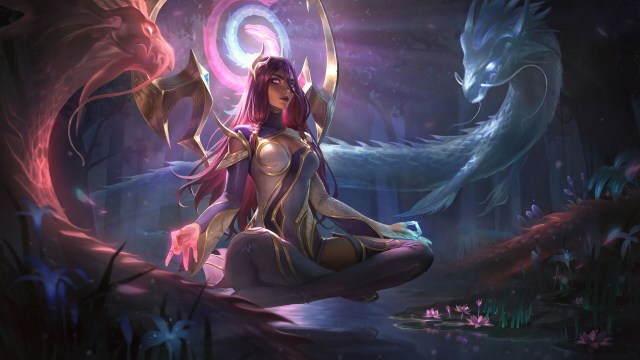 Provided by Riot Games Dragonmancer Karma is one of the best performers on Day 1 of Patch 12.20

The new patch for the Teamfight Tactics Dragonlands expansion is officially out on all live servers.

With the new update bringing a ton of new changes, players may have questions on what is good to play especially in the early patches of 7.5. Upcomer has you covered. By combining information from data websites like MetaTFT.com and expert analysis, we have developed a tier list that not only shows players what the best comps are but also why.

Would you look at that, the best comp for the fourth straight patch is again the four dragon compositions featuring Idas, Ao Shin, Terra and Shyvana. At this point everyone should be aware of how strong this comp is and why. The comp is essentially the most capped a board can get in TFT Set 7.5. That’s because the sheer strength of the Dragon champions cannot be matched.

But the thing about this comp is its not something players can force. That’s because to make this comp work, players need a ton of gold and be healthy enough to make the transition. But if they do, winning lobbies is pretty free. The only difference in this patch is that Shi Oh Yu and Aurelion Sol can be alternatives if Ao Shin and Terra are not found.

One of the most popular comps to jump into the meta with the release of TFT Patch 12.20 is Dragonmancer Karma. With the buff to the Dragonmancer trait in the new patch, everyone’s favorite reroll comp is definitely viable once more.

Instead of rerolling three-cost champions like Volibear and Lee Sin, this version of Dragonmancer opts to reroll the low-cost champions like Sett, Kai’Sa and of course, Karma. Karma is an absolute menace and can AoE one shot pretty much anyone at any stage of the game.

Just like last patch, the combo of Sy’Fen and Shi Oh Yu is still meta-relevant in TFT Patch 12.20. The comp has not changed as the main carries are still Shi Oh Yu and Sy’Fen who provide excellent kill potential as Shi Oh Yu takes care of the frontline while Sy’Fen dives the back. And the comp also has two fantastic secondary carries in Pantheon and Jayce.

You cant go wrong with Lagoon at the beginning of a patch cycle. While not the best comp or the most strong, Sohm is a fantastic top four composition with upside as the stats show so far in TFT Patch 12.20. The comp is exactly the same still with Sohm being the main carry while Sylas and Zoe round out the strong Mage lineup. Nilah is a fantastic secondary carry option if players find too many attack-damage items.

The Queen of TFT Dragonlands is still here with the same supporting cast. Guild Xayah isnt as good as she has been in earlier patches but if players hit the end-game board, the comp is still more than capable of winning lobbies. The plan is still simple, get really good items on Xayah, hit the guild champion upgrades along with a strong frontline and in the late game, find a Shyvana for the massive one-two punch.