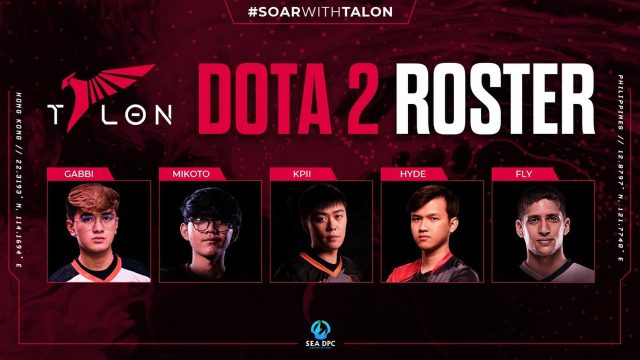 Provided by Talon Esports The team has a mix of incredible veterans and young players, and will definitely make a mark next year.

The Hong Kong team Talon Esports are entering Dota 2, according to a team announcement this morning. The long-time League of Legends organization now has one of the strongest rosters coming out of the Southeast Asia Dota Pro Circuit.

Talon are most well-known for their multiple League of Legends World Championship runs since 2019 and will now attempt to bring that dominance over to Dota.

The team is likely to be led by Tal “Fly” Aizik, the veteran captain who has played in Western Europe and North America. He previously captained the North American superteam Evil Geniuses, but they ended the season below their expectations at The International 10. Fly is joined by two more Southeast Asian veterans in Damien “kpii” Chok and Kim “Gabbi” Villafuerte. Kpii has been a part of many successful teams, including  Newbee Esports, who made it into the grand finals of the International 7. He was also previously on Team SMG, who were contenders in the Southeast Asian Regional Qualifier. On the other hand, Gabbi is one of the best carry players in Southeast Asia. When TNC Predator disbanded a few months ago, fans speculated as to where Gabbi would end up, and Talon are definitely a team to utilize his talents.

The three veterans are backed up by two youngsters in Brizio Adi “Hyde” Putra Budiana and Rafli Fathur “Mikoto” Rahman. The Indonesian support duo were previously a part of Boom Esports, who performed extremely well in the Southeast Asian regional qualifier ahead of The International 10. Now the support duo move to Talon with the hope of building a championship roster around Fly.

“DOTA 2 has been a game that we have long sought to enter and finally in 2021, we have arrived,” Sean Zhang, CEO of Talon, said. “The Philippines will be the home of our new squad and we look forward to embracing the passionate fan base of the country. We have put together a supremely talented roster with the goal of contending for majors and, of course, the International next year.”