JDG takes on Rogue, DK goes up against Gen.G, and EDG fights DRX 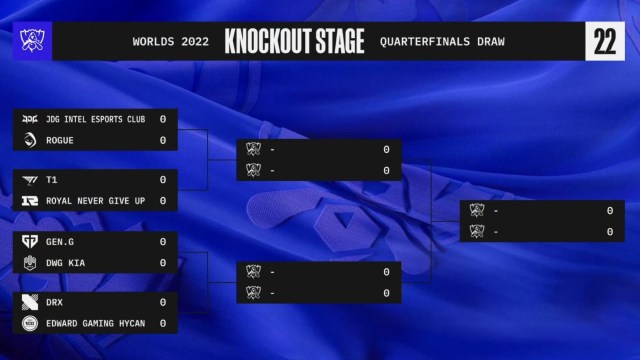 With the group stage at League of Legends Worlds 2022 now complete, it’s time for the top eight teams to advance to the quarterfinals. With the knockout stage draw finished and the matchups set, the Worlds 2022 quarterfinals will commence on Thursday, October 20 and run through Sunday, October 23. Here are the matches fans will get to see.

The first match in the quarterfinals will pit the League Pro League champions, JD Gaming against the League European Champions, Rogue; a battle of China and EU’s best. JDG were near unbeatable in the group stage — only losing a single game to DWG KIA — but got out of Group B with a tiebreaker win. Rogue, on the other hand, were literally unbeatable in Week 1, going 3-0 but struggling in Week 2. However, they still managed to do well enough to get out of Group C in second place.

Right next to those two teams, the best matchup on paper in the quarterfinals will pit the LCK second seed, T1 and the LPL fourth seed Royal Never Give Up in a rematch of the 2022 Mid-Season Invitational. RNG came out on top in that match in a five-game thriller; but with both teams having an entire summer to improve, this match could go either way. At Worlds 2022, T1 managed to escape Group A as the top seed; meanwhile, RNG couldn’t get the job done in Group D. Of course, this comes with the caveat of a widespread Covid wave hitting RNG’s entire starting roster, but even with the team ill, RNG still managed to get out of Group D in second place.

On the opposite side of the bracket, there is an LCK head-to-head between the first seed, Gen.G and the third seed DWG KIA. Gen.G are among the favorites to win the entire tournament, but the Worlds 2020 champions are not to be taken lightly. After going 5-1 in their Group, DK look like title contenders themselves.

And finally, we have the reigning Worlds 2021 champion Edward Gaming taking on the LCK fourth seed DRX. DRX have clearly looked better at Worlds 2022 than they did in the LCK summer split and were rewarded for their efforts with the one seed from Group C. However, they are almost certainly the underdog against EDG, who are a force to be reckoned with in best-of-five matches.