Strongest cards to use in Marvel Snap, ranked

Strongest cards to use in Marvel Snap, ranked

A look at the best cards in the current metgame 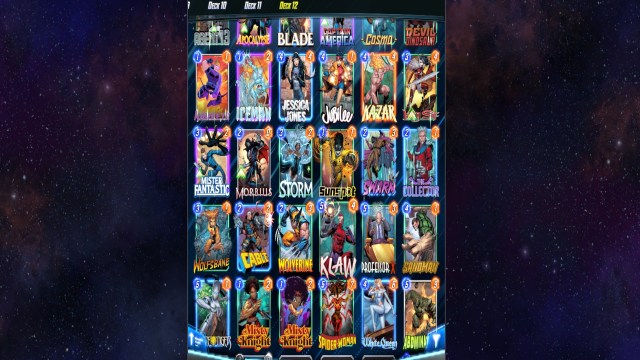 Screenshot via Marvel Snap With so many cards, here is a list of the five best in Marvel Snap.

With more players getting their hands on more and more cards in the new hit card game Marvel Snap, players may be wondering what the overall best cards in the game are. Here is a list of the top five most powerful and strongest cards players should expect to see in Marvel Snap.

Players that have progressed to Pool 2 know all too well about this card. As players enter the second pool playing the same deck that helped them climb in Pool 1, mainly utilizing one-cost cards, Killmonger is an effective game-winner for the opponent.

With the ability to destroy all one-cost cards, this three-cost card by itself can destroy entire enemy boards and with one-cost spam being one of the most played strategies in Marvel Snap, this card is definitely one of the strongest cards in the game.

Speaking of the literal strongest card in the game by power, The Infinaut brings players a six-cost card that has a whopping 20-power. The card does have a draw back of not being able to play a card on turn five but that’s hardly negative seeing as 20 power boost to lane more than makes up for it.

Count in cards that can cheat this out like Jubilee or cards that benefit from passing a players turn like Sunspot and it’s a no-brainer why this card is so powerful.

While The Infinaut is the most powerful card power-wise, Devil Dinosaur gets pretty big too. With the ability to gain two additional power for every card in hand, there are many support cards that can help Devil Dinosaur grow to ridiculous power levels and the best part is that the card can be played on turn five.

Beginner players probably assume this is the best card in the game and it turns out that even when players progress to higher ranks, it still is. A major part of meta-viable Pool 2 and Pool 3 decks, Kazar’s boost to one-cost cards is still potent even in the late game.

And finally, there is Death. Destroy decks are very potent in the metagame and in Pool 3, its a contender for best deck in the game. But the main reason for it is Death herself. That’s because she is a potential zero-cost 12-power card which is unreal value. And seeing that she is part of a deck that actually likes to destroy cards, this card is by far one of the best cards in Marvel Snap.