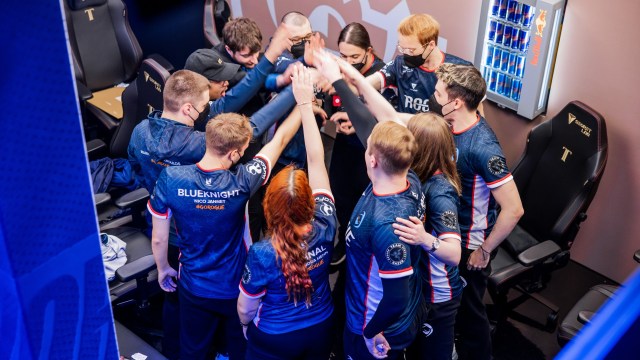 Through the first half of the League of Legends Worlds 2022 group stage, no western team from Europe or North America have made it out the group stage. In fact, no team has really come close.

With Evil Geniuses, G2 Esports, Fnatic and Cloud9 all failing to deliver for the western hopeful, surely the 3-0 League European Championship one seed would deliver. In almost every scenario, a single win would push Rogue to the knockout stage without even needing a tiebreaker.

Even though they did secure the win in their first match in Week 2 against GAM Esports, they still technically couldn’t clinch. Even though Rogue beat GAM, with GAM’s first win at Worlds 2022 against Top Esports, they did Rogue another favor as Rogue has officially clinched a spot in the knockout stages.

GAM kept up with Rogue early but EU’s last hope showed they were clearly the better team as they beat GAM in just over 30 minutes. With the loss, GAM were on the brink of elimination and were no longer in control of their destiny. But in the absolute craziest game so far at Worlds 2022, GAM Esports did everything they can to keep their hopes alive as they pulled out the wild win against TES.

There is now a scenario where the remaining three teams in the group all go 2-4 to see who gets the last spot in the knockout stage from Group C.

Rogue outperformed all expectations during Week 1 of the group stage when they entered group C as an underdog despite being the LEC champions. With Top Esports and DRX in their group, they came in on the outside looking in but with a clean sweep, they put themselves at the top of the group.

Even if Rogue lost every single game in Week 2, there would only be a single scenario that would cause them to whiff the knockout stage outright. They were practically guaranteed at least a tiebreaker game no matter what happened but silenced all other possibilities with a win against GAM.

With GAM's win, @Rogue secure their spot in the #Worlds2022 Knockout Stage! pic.twitter.com/ZfZHXf5uKq

It’s been rough for the EU and NA at Worlds 2022 so far. During Week 1 NA made history by going 0-9 in games with all three League Championship Series representatives going winless. EU on the other hand had a really good Week 1 with Fnatic going 2-1 and Rogue going 3-0.

However, Fnatic went winless in Week 2 and G2 Esports also went winless as EU is currently trying to do its best NA impression. Luckily Rogue saved the day as they finally gave EU something to be proud of. NA still technically has 100 Thieves but will need them to go 3-0 tomorrow to even have a chance to qualify alongside Rogue.