"I'm really touched by the [...] vibes from the crowd": RNG's Breathe feeling good about LEC at Worlds 2022

“I’m really touched by the […] vibes from the crowd”: RNG’s Breathe feeling good about LEC at Worlds 2022

Breathe is making the most of his Worlds debut by taking everything in both emotionally and mentally. 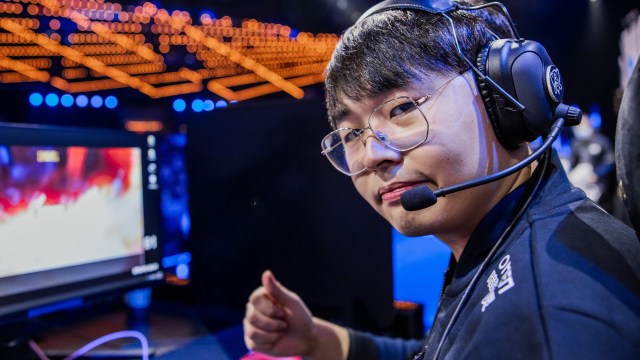 Although this isn’t even close to Royal Never Give Up’s first international appearance, it is for their top laner Chen “Breathe” Chen.

After struggling for years to make it to Worlds, especially after a heartbreaking 2021 campaign, Breathe was finally able to let out a sigh of relief when he was able to break his curse and make it to Worlds 2022 as the fourth and final seed from the League of Legends Pro League. Just as he started to celebrate on stage, he broke down in tears of joy as he finally was able to realize a dream come true.

Now at Worlds 2022, Breathe is a player that wears his emotions on his sleeve and uses those emotions to drive him to be an even better player.

“I feel really touched by the emotions and by the atmosphere and the vibes from the crowd,” Breathe said. “Because of COVID sometimes in the LPL we just played online so I haven’t experienced this for such a long time. It’s great that I can experience all the passion from the crowd and audience this time.”

BREATHE GETS THE KILL IN THE 1V4! #WORLDS2022 pic.twitter.com/QEIzGKMEZB

Breathe no doubt is feeding off of that passion and has performed well so far in the Worlds 2022 group stage. After winning their first two contests against CTBC Flying Oyster and the Worlds 2022 favorites, Gen.G, Breathe is happy about his performance but he is just trying to take things one game at a time and most importantly, use every game as a learning experience.

“With this being my first Worlds journey, this really means a lot to me because I can play against teams from all the different regions,” Breathe said. “I can learn from the best teams and the very strong teams and players.”

Speaking of those players, by going through the play-in stage, Breathe has already played more games at Worlds 2022 than most teams have and he has definitely used that to his advantage. When it comes to reflecting on his matches so far and which teams and players have impressed him, Breathe pointed towards the League Champions Korea players.

“I believe all the top laners I have already faced are super strong but in terms of the most impressive ones, maybe [Hwang “Kingen” Seong-hoon]  from DRX and [Choi “Doran” Hyeon-joon] from Gen.G,” Breathe said. “Previously I have really watched their games a lot and learned a lot of stuff from them.”

But when it comes to gauging the strength of teams, Breathe said that since the group stage is a bunch of best-of-ones, it’s hard to distinguish teams that are just having good games versus teams that are legitimate contenders. However, he has been impressed with the League European Championship teams even though he thinks the region is usually strong.

“I always think the EU teams are super strong as they have their own strengths and abilities,” Breathe said. “In play-ins I played against MAD Lions [İrfan Berk “Armut” Tükek] and I really think Armut has a unique understanding of the meta and his own thoughts in the actual games, also Fnatic has also shown their abilities to us so I feel like EU teams are super strong.”

As for how Breathe will continue to do in the group stage, he thinks that thanks to the top lane meta, he feels that he can keep his focus on improvement while still being able to play the champions he is best at.

“We are playing the 12.18 meta which is two or three metas skipped from LPL playoffs but I feel like for top lane champions, I don’t feel much difference,” Breathe said. “I’m quite familiar with all the bruiser champions so I feel like I’m still in my comfort zone.”