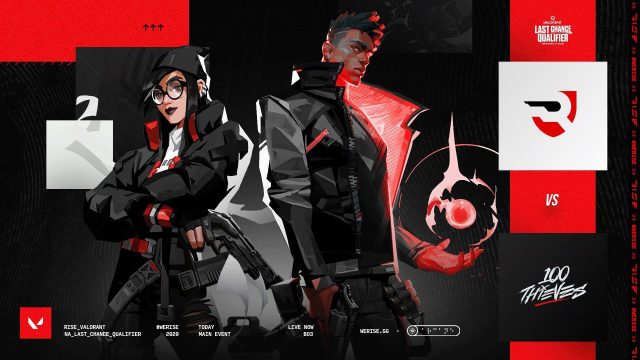 Photo provided by Rise The pre-match graphic for Rise's match against 100Thieves, which they won 2-1.

Rise came into the NA LCQ as an underdog, the third-lowest seed in the tournament after only earning qualification points through the Stage 3 Challengers Playoffs. Now, they’re using their team coordination and momentum to go on a flaming hot run by making it to the grand finals of the NA LCQ. But that is all made possible by the one thing all five players coincidentally have in common.

“Everyone on the team is fully Vietnamese while Derrek is half-Vietnamese,” said Kevin “poised” Ngo. “It just happened to be that all the dudes we signed were all part or fully Vietnamese. It helps because we can relate more and there’s more overlap with what we know. It’s just super easy to work together.”

The bonds of brotherhood

This Rise roster consists of three American players and two Canadians, all with Vietnamese roots. But, their connection is deeper than just nationality, as poised is the older brother of teammate Ryan “Shanks” Ngo. Hailing from Windsor, Ontario, these two brothers have been competing together, in games and sports, from a young age.

“We played basketball and video games together every day growing up,” said poised. “We grew up playing on consoles, playing athletic wings on NBA 2K, doing a lot of dunks and getting a lot of three-pointers. Also, we played a lot of Call of Duty, legends on Search and Destroy. As we got a little older, like grade 5-6, one of our cousins showed us Counter-Strike 1.6, and then we got into that and never looked back.”

When that interested evolved in the possibility of an esports career with VALORANT’s release, poised said he knew both he and his brother could make go pro. They both began their VALORANT careers on Team Underrated alongside future teammate Jason “neptune” Tran. After a couple of months, poised moved on to Dignitas and his brother joined afterward on a trial contract — but Shanks didn’t stay long before moving onto NRG. Even after that split, they ended up together on Rise months later.

From poised’s perspective, after all they went through playing games when they were younger, it was a perspective shift and VALORANT’s release that got him to realize how well he could play alongside his brother.

“Throughout my whole life, I never took anything too seriously,” poised said. “When we did start taking games seriously, to make a career out of it, we knew we wanted to play together if we could. When VALORANT came out, we knew we had a better chance to play together if we both went pro in it. Ryan and I just always played together, and as soon as we took it seriously we knew it would work out.”

Despite not finding the best finishes on Rise, one of the biggest stories in the NA LCQ revolves around their current run. It started when their first game of the tournament was delayed after false positive COVID-19 tests on the opposing team, FaZe Clan. That ended up postponing the entire tournament for more than a week, leaving their match for when things started back up.

After overcoming that setback and beating FaZe, they faced more adversity when teammate Phat “supamen” Le’s power went out for during their second game of the tournament against Cloud9 Blue. That game also ended up postponed, albeit for just one night this time.

Being able to deal with those problems and still reach the winners bracket finals is a big step for Rise. They won that game against Cloud9 Blue and faced off against favorite 100 Thieves afterward. That game ended up very close, but a clever move on the attack by Rise led to a forced 5v5 retake for 100Thieves, and Rise clutched it out to reach the finals of the NA LCQ.

The best part of it all for poised is to see the time and effort this team put into this game finally flourish when it mattered most.

“Honestly, it feels amazing leading this team,” said poised. “You get to see the work you put through come out. There’s a lot of stress that comes with IGL’ing, but when it works well it feels amazing.”

Now all that remains is to overcome one final obstacle: whichever team can claw their way back up from the lower bracket. And while they may yet be forced to deal with a new kind of adversity, as long as Rise are together, they have a shot to achieve what few expected them to at the NA LCQ.