Proper is the Overwatch League 2022 MVP

Proper is the Overwatch League 2022 MVP

Role Star, Rookie of the Year and now league MVP 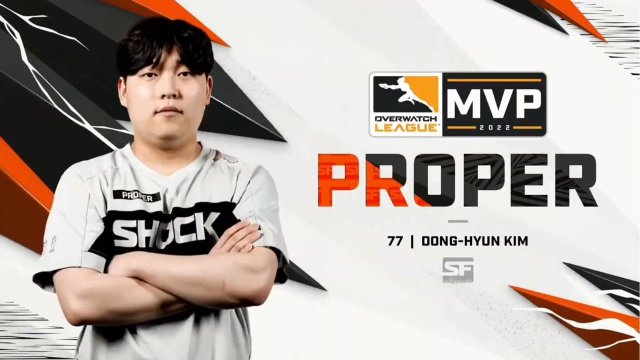 Revealed on the final day of the Overwatch League 2022 season playoffs, Kim “Proper” Dong-hyun is the league MVP for the 2022 season. Not only is Proper a Role Star for his play on DPS, and the Alarm Rookie of the Year, but he is also the MVP. For a massively re-tooled San Francisco Shock, Proper is the catalyst to the team’s success over the entire 2022 season.

LADIES AND GENTLEMEN, THE GOAT HIMSELF @Ow_Proper IS YOUR 2022 OWL MVP

Coming into the 2022 season, both Proper and the San Francisco Shock had optimism as a re-tooled squad. Yet, other teams seemed to have better cohesion, better rosters, and players on paper. Plus, how much he could affect the Shock remained undetermined as a rookie out of Korean Contenders.

Then, leading the Shock to perfect qualifiers in the Kickoff Clash on Genji, those doubts were quickly dismissed. No matter what he played, from Sojourn to Ashe and more, Proper showed exactly why he was the best talent in the league.

That same talent led to his rookie of the year award, winning that award simply days prior. However, due to how crucial he was to the Shock’s success, he was the most valuable player to his team. While other players like Choi “Hanbin” Han-been were amazing over the entire season like Proper, they weren’t as crucial to their team’s victories as Proper was.

Can he finish the year with another trophy?

From Role Star to Rookie of the Year to MVP, Proper has had an amazing 2022 season. Even better, he’s still in the running alongside the Shock in the season playoffs. In the lower bracket, facing off against the Houston Outlaws, he has a chance to win a championship to cap off this ground-breaking season.