Pokémon Fusion Generator — Where to find and how to use - Upcomer

Pokémon Fusion Generator — Where to find and how to use

How to make monstrosities that Game Freak would never dream of 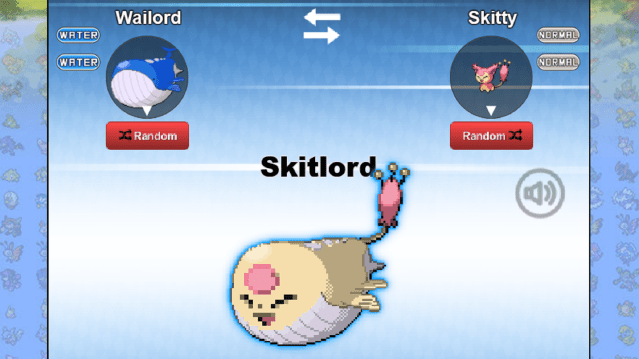 Provided by Japeal The result of fusing Wailord with Skitty.

The concept of a Pokémon Fusion Generator has played only a minimal role in the official Pokémon games. Pokémon Black 2 and White 2 introduced the idea by allowing players to fuse Kyurem with either Reshiram or Zekrom. However, players have never had a more open-ended opportunity to fuse different kinds of Pokémon together.

Even so, a fanmade Pokémon tool gives users the opportunity to see what different Pokémon might look like if combined in the two-dimensional art style of Generations 4 and 5. Here’s everything to know about where to find the Pokémon Fusion Generator and how to use it.

How to use the Pokémon Fusion Generator

The Pokémon Fusion Generator is available through Japeal, which has similar character combination tools for Dragon Ball, One Piece and Digimon. Users can opt to generate two random Pokémon for the tool to fuse. Otherwise, they can specifically search out and select the two Pokémon they would like to combine.

While the tool does not currently have any Pokémon from Legends: Arceus or Scarlet and Violet, it does have the majority of the Pokémon from Generations 1 through 8. However, some of these are only available if users subscribe through Patreon. Mega Evolutions, alternate forms and Pokémon that originated in the Scarlet and Violet downloadable content are generally locked behind the paywall.

After selecting two Pokémon and clicking the prominent “Fuse” button, the tool will create a combination of the new monsters. The new creation will take the first half of its name from the second Pokémon chosen and the last half of its name from the first Pokémon chosen. Meanwhile, it will have the body type of the first Pokémon selected, but the face, color scheme and other features of the second Pokémon. Finally, its type will simply be a combination of the primary types of the two Pokémon used to create it.

If the two fused Pokémon are unevolved, then an “Evolve” button will appear to the bottom right of the fusion. Clicking this will create a fusion of the evolved forms of the previously fused Pokémon. Users can tinker with the design of their creation by clicking the color boxes at the bottom of the screen. This brings up color sliders they can use to adjust the color of certain parts of their fusion monster’s body.

By clicking the painting icon toward the bottom right of the screen, users can pose their creation on a pre-set background, along with other sprites from the official Pokémon games. Meanwhile, clicking the Pikachu icon to the left of it lets users select sticker accessories from the Generation 4 Fashion Case to give their creation.