Can the team maintain relevancy in the APAC LCQ? 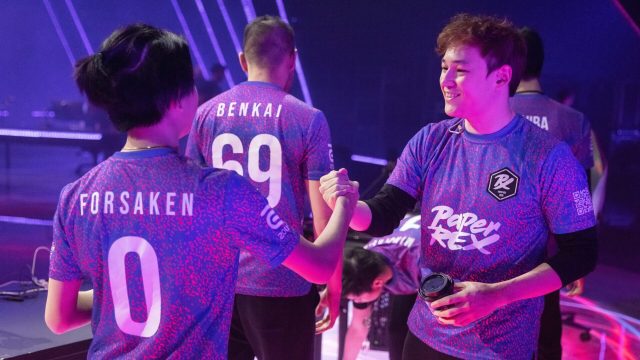 Provided by Riot Games Paper Rex teammates embrace each other after a tough match at Masters Berlin.

The Paper Rex squad returned home to their respective countries after VALORANT Champions Tour Masters Berlin with the Asia-Pasific Last Chance Qualifier on their minds and their heads held high. While they hadn’t won a match, they did launch into the public consciousness, thanks to Benedict “Benkai” Tan’s antics and their hard fought losses to Vision Strikers and SuperMassive Blaze.

According to Paper Rex Coach Alexandre “alecks” Salle, at Masters Berlin, the team had hit their KPI’s for the year from their organization. So, winning at the international competition or making their way to Champions through the LCQ would only add extra amenities to an overall successful year.

But that doesn’t mean Paper Rex aren’t trying to fight their way through the tournament and make an international appearance once again.

“We put more pressure on ourselves,” alecks said, “because — especially in this tournament — if we have a bad showing, everyone would probably laugh at us. So ,we needed to really work hard under conditions that we’re not very comfortable with.”

The players would scrim almost every day from the hotels they were quarantining in. Using rented computers and stock standard hotel furniture, Paper Rex had to deal with the frustration of hotel wifi, integrating a new player into their lineup and role swapping players.

After Berlin, the team decided that a fresh face was in order and picked up Team SMG’s Wang “Jinggg” Jing Jie. With the new member, the team decided to speed up the integration process by shuffling around their roles to make the Duelist player more comfortable. They also started scrimming with him while in quarantine, which was difficult during daylight hours when everyone wants a piece of the free wifi pie.

According to the team, finding practice partners was also a tad difficult. Other squads were either on break and waiting for the second year of VCT, had a full scrim schedule to prepare for Champions or were competing in the same tournament. So, options were limited, to say the least.

For the team’s main Jett player Khalish “d4v41” Rusyaidee — who also had to learn Sova in the short time between Berlin and the LCQ tournament — the hotel amenities were less than ideal for practice in-game and for the health of his wrist.

“I need a hand rest and a proper chair to play,” d4v41 said. “If not, I would hurt my hand by just playing even a few hours.”

But d4v41 powered through the eight hour scrim days and even put in time after to practice his new agent Sova. According to alecks, everyone on the team put in more time after scrims to get accustomed to their new roles. Whether it was practicing lineups or watching videos of other top players, the team wanted to be up to snuff in time for the tournament.

Paper Rex are a team that thrives when loose and uninhibited. They have admitted to tensing up when put under pressure. Some of the players even consulted a sports psychologist, while still playing Counter-Strike, to understand the root of this problem.

“We tend to play worse when we have expectations,” d4v41 said. “So, we tried to just reduce the stress or the pressure so that we can be able to focus in and just have fun, like how we used to have fun in practice.”

But there is always pressure when it comes to esports. And this is especially true for a team that is fighting to remain relevant after an international appearance where they were knocked into the lower bracket. Going into the event, alecks was not confident in the team’s chances to make the final. He put their odds at around 30%.

The team shared that they don’t like to think about the bracket or their chances of making the final. Rather, they take the tournament match by match and have aspirations to maintain their own level of play and gratitude toward the game.

“I think on the side of our organization and the players, we all know that we are coming in with zero expectations,” alecks said. “We hope to qualify, but then, of course, we’re not thinking about it. We are going to just try and take everything day by day.”

Alecks went on to say, “at the end of the tournament, I think we’ll look back and, if we can safely say that we gave it our all, I think we’d be quite happy.”

Paper Rex continue their APAC LCQ journey Friday against DWG KIA in the lower bracket in the second game of the day.