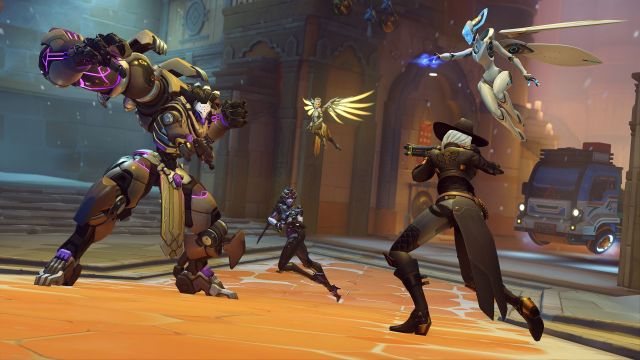 Provided by Activision-Blizzard. Heroes battling on the new map, the Shambali Monastery.

With each new season in Overwatch 2, hero balance updates come along and change up which heroes are best, so here is the tier list for heroes in Season 2. This post will be updated either every major patch or every season, depending on which comes first.

Just to keep it fair, this is based on a mix of pro and casual gameplay, as that is what the developers aim to balance the heroes on. Even then, early on into Season 2, some heroes clearly got better while others remained the same or got worse. This specific tier list didn’t include Ramattra, as he is only played in quick play for the start of Season 2. But will be updated after he goes live in competitive.

First off, the recent Doomfist buffs have moved him from one of the worst tanks to one of the best. While his kit didn’t get any major changes, he has generally improved in almost every category. People who learnt his modified kit from the original Overwatch and played him in Season 1 will be dominant, especially because he can dive on supports and kill heroes like Kiriko and Ana quickly.

Roadhog is back, especially as a Doomfist counter. The ability to hook a Doomfist through his only method of tanking damage with his Power Block is one of the few true counters to Doomfist tanks currently have.

Kiriko is still an instant pick, and that hasn’t changed since her introduction into the game. The updates that did come around for Season 2 nerfed her ultimate a little, but also buffed her Protection Suzu, making her a little easier to play throughout the game.

Last but not least, Bastion has seen a rise in recent weeks, and he got even better in Season 2. Thanks to his great damage output, he can counter both the S-tier tanks above if played correctly and kept alive. Much like Doomfist, as long as you can get accustomed to the new abilities he has in Overwatch 2, he is a very powerful DPS.

To keep it simple, a lot of these heroes in this tier remain here from last season. Sojourn, while not an instant pick anymore, is still very good. Reaper, Reinhardt, Sigma, and the rest were all good towards the end of Season 1 and continue that for Season 2.

One thing to keep in mind is that with Doomfist being one of the best tanks, a lot of tank heroes are good. Basically, swapping tanks is more crucial now than ever, making most tanks viable in various situations.

Not as good as the tiers above, the B-tier consists of heroes that you can win with if you’re good enough across most ranks. Specific heroes that weren’t as good in Season 1, like Sombra and Torbjorn, have gotten better thanks to Doomfist’s rise.

Both Winston and D.Va are in B-tier instead of A-tier since they can get countered by both the S-tier tanks if played well.

For this tier, these picks are very situational, but not insta-lose picks. Wrecking Ball and Junker Queen are great examples, with value only in specific moments.

Hanzo, especially with a recent knockback bug for his aim, still doesn’t serve much use. Mei, while good on paper against the best heroes in Season 2, can be very easily focused and killed.

The only hero in this tier is Brigitte. Her role in this game is fading, especially since Kiriko arrived. Ever since her reintroduction into Overwatch 2 without the stun, she’s been slowly becoming one of the worst heroes in the game. Now, with Doomfist and Roadhog so viable, she’s even easier to focus.