FNS: 'It's gone more in our favor than theirs. Hopefully it stays that way tomorrow.' 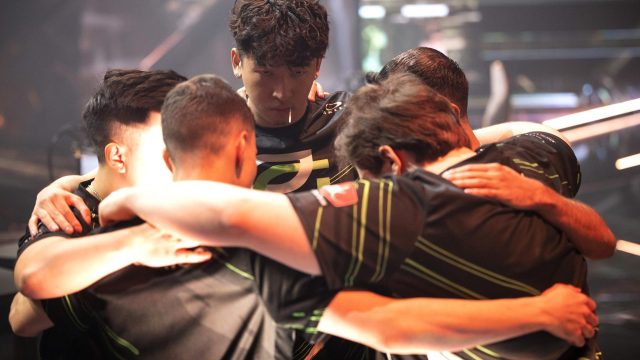 OpTic Gaming are off to a strong Champs start with a 2-1 win over BOOM Esports. With the win, OpTic advance to the winner’s match in Group B where they will face Brazilian rivals, LOUD.

OpTic and LOUD have met at multiple different international tournaments; the rivalry kicked off at the start of 2022, during Masters Reykjavík. The teams met twice, with OpTic ultimately coming out on top.

“Every time we’ve played against them, it’s always been close games,” OpTic’s in-game leader Pujan “FNS” Mehta said in the post-game press conference. “Literally could’ve gone either way. Luckily for us, it’s gone more in our favor than theirs. Hopefully it stays that way tomorrow.”

The battle between the best teams of North and South America kicks off at 2 p.m. ET on Sept. 2. If the match between OpTic and LOUD follows the trend of their previous meetings, it promises to be a spectacle.

“It’s definitely been quite a show playing against them every time,” FNS said. “So I think there is a little bit of a rivalry there.”

Unfortunately for OpTic, a positive COVID-19 test led to head coach Chet “Chet” Singh directing the team from isolation against BOOM. He likely won’t make a return in time for the match against LOUD.

In Chet’s absence, it’s fallen to FNS to help settle the team on stage. OpTic’s in-game leader spoke to how he’s been trying to stave off the slow start that has plagued the team at previous events.

“I would attribute us having slow starts to every being too tactically aware too early in the game and everybody wanting to follow those strats,” FNS said. “But this time around we’re changing that a little bit by players having more freedom.”

OpTic’s individuals definitely showed some of that freedom during their match against BOOM. Even still, it didn’t start according to plan for NA’s best.

BOOM Esports came up with the win on their map pick of Breeze after a whopping seven overtimes. According to BOOM’s in-game leader Saibani “fl1pzjder” Rahmad, the team wasn’t feeling nerves during that first map.

“We’re the newest member, the newbie in the tournament,” fl1pzjder said in an interview. “So we don’t really think about it. I might say we’re the underdog, so we don’t feel the pressure.”

After Breeze, the momentum swung back in the favor of OpTic, the favorites. It may not have been nerves affecting BOOM, but their inexperience showed in other ways.

“In the game, we were just giving them too much respect,” fl1pzjder said. “We should’ve just played how we used to.”

Bind went to OpTic, as did the decider of Fracture. Map 3 also gifted fans with what may be the most unexpected Ace ever in the VALORANT Champions Tour.

“Both teams were just laughing,” FNS said of the moment. “I was just staring at the other team laughing because that’s never gonna happen again; I wasn’t laughing to be insulting or BM or anything — I think it was just funny.”

Group B is off to the races

While OpTic go on to face LOUD, BOOM will be battling ZETA DIVISION for their tournament lives.

“Even though we lost this game, we learned a lot from our mistakes,” fl1pzjder said. “They taught us how to really play in the LAN environment. That’s really big for us. I think we can beat anyone after this.”

Fl1pzjder was complimentary of OpTic — he spoke about how he even watched some of OpTic’s matches on certain maps to adapt his own strategies. BOOM’s team composition on Fracture is based on OpTic’s composition on the map.

“They’re more structured,” fl1pzjder said about OpTic. “They adjust. They change the game so fast, like how they play. I think that’s what makes them so good as a team. Not all APAC teams can do a thing like that.”

OpTic may still be a ways ahead of BOOM, but the NA team still has their own issues they need to work through. At Masters Copenhagen, the OpTic struggled with bad communication in their final matches. It’s something OpTic intend to clean up ahead of their match against LOUD.

Ultimately, OpTic need to be perfect. Champions Istanbul has brought the best teams in the world together and only the best will lift the trophy.