And all of them will continue to have the same picks after as all eight picked T1 and Gen.G to win their matches. 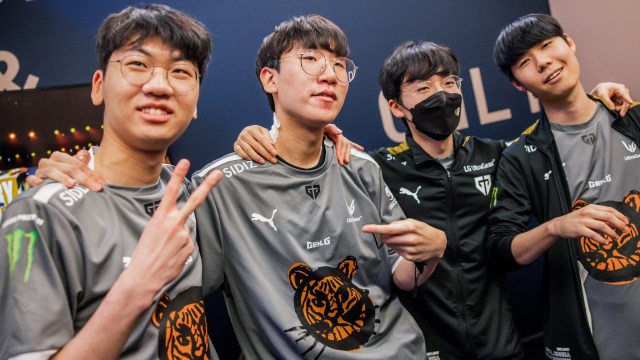 Provided by Riot Games/Getty Images/Colin Young-Wolff If the Oracles are correct, Gen.G will be coasting into the finals at Worlds 2022

Every year, hundreds of thousands of people enter Riot Game’s Worlds Pick’Ems with the ultimate goal to go perfect. The reward for doing so is, well, ultimate. Anyone who goes perfect in their Pick’Ems from the group stage onwards receives every single Ultimate skin in the game of League of Legends.

As the tournament reaches the later stages, Oracles appear as the unpredictable event wipes out every expert’s opinion. This year at Worlds 2022, heading into the semifinals, there are eight people left with perfect Pick’Ems. But the twist is that none of the eight deviated their picks from each other.

With all eight people picking T1 to take down JD Gaming and Gen.G to beat DRX, there will either be zero people with perfect Pick’Ems or all eight will move on to the finals after this weekend.

This year hasn’t been terribly hard to predict. Of course, there are going to be hard picks — which is why there are only 8 players remaining heading into the semifinals — but for the most part, this year has been rather tame outside of the Cinderella story, DRX. The other big upset picks included having Rogue finish second and Top Esports finishing third in their group.

One of the categories is “Which team will win Worlds?” Out of the seven Oracles, three of them went with T1 and four went with Gen.G. Just like the traditional Pick’Ems, if anyone gets all the Crystal Ball categories correct, they will also win every single Ultimate Skin. However, there will for sure be no double-winners this year. That’s because, for their hit rate on the rest of the crystal ball categories, none of them are even close to perfect in those.