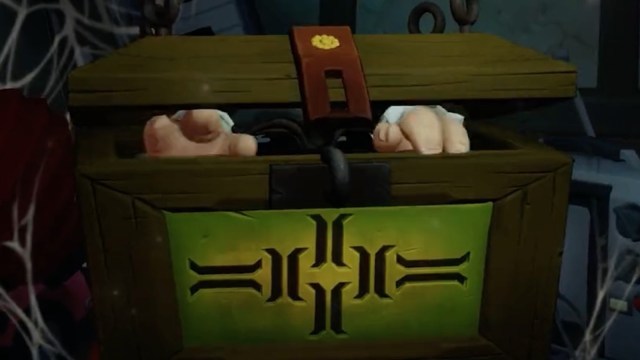 Provided by MultiVersus Gizmo has been teased a few times but his moveset in MultiVersus is still unknown.

MultiVersus confirmed earlier in the week that Gizmo from Gremlins would be joining the ever-growing roster of playable characters from Warner Bros.’ vast properties. The highly anticipated character will be delayed, however.

Gizmo was initially set to join MultiVersus on Tuesday, September 6. However, that release date has been pushed back two days, meaning Gizmo will now be coming on Thursday, September 8. The news was shared on Twitter, with developers joking that Gizmo has become a bit shy and will need to be coaxed “out of his box.”

While disappointing to have to wait a bit longer for Gizmo, the update did give the FGC a first glimpse at Gizmo’s in-game appearance.

Looks like Gizmo is a bit camera shy. We're going to need a few more days to coerce him out of his box. He'll now be joining the roster on Thursday, 9/8. pic.twitter.com/hZSzFMb8Yp

Player First Games didn’t explain the reason behind the short delay, but it’s most likely due to the new character needing a bit more fine tuning before he joins the fray.

It’s unclear if the rest of the next update will also be pushed back to September 8, but this is more than likely. The incoming patch is the “biggest one yet,” according to director Tony Huynh.

Who is Gizmo in MultiVersus?

Gizmo is the main protagonist of the Gremlins franchise. He is a wholesome Mogwai, owned by Billy, who refuses to be evil. Even though Gizmo is kindhearted in Gremlins, he’ll be joining MultiVersus as a fighter looking to KO his opponents.

We've got a little, fluffy surprise headed your way on Tuesday! #MultiVersus pic.twitter.com/83CVuUs0p2

First announced on September 1, the teaser trailer offered some hints at Gizmo’s in-game abilities. There are some clues in the video, like a tricycle and popcorn. These two things were also mentioned in Gizmo’s files when a dataminer uncovered some sound effects for the upcoming character.

Spike is also coming to MultiVersus in Season 1. At first, fighting game players were confused if Spike would be a separate fighter from Gizmo. Huynh clarified on Twitter that the two would be their own fighters. Spike appears to have a buzzsaw blade in the trailer, something that was previously leaked along with gunshot audio. It’s currently unknown when exactly Spike will join Gizmo in MultiVersus.