It’s been an off year for the Melee GOAT 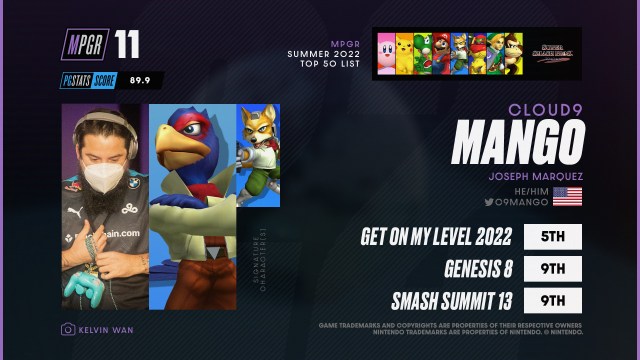 Provided by PGstats An impressive season by most players’ standards was the worst in Mang0’s career by far.

Mang0 also ranked in the top three every year from 2008 to 2012 on the unofficial RetroSSBMRank, which Smash History released in 2017. Mang0’s lowest rank before now came during his first year of competition in 2007. For that year, the RetroSSBMRank placed him at No. 9 in the world.

Presenting the next batch of players ranked 30-11 on the Summer 2022 MPGR!

Click the link below for more information including individual write-ups and player cards.

How Mang0 missed the MPGR top 10

Mang0 came into this season with a great deal of momentum. Not only was he ranked first in North America last year, but he was also declared the greatest Melee player of all time. He also placed second at the online Ludwig Ahgren Championship Series 4 in January.

However, when the 2022 season began in March, Mang0 placed outside of the top eight at three consecutive majors – a first for his career. In the process, he incurred a loss to Evan “Fizzwiggle” Akhavan, who is not ranked in the top 50.

Nevertheless, Mang0 has generally been consistent against lower-ranked players this year. Meanwhile, he defeated Jake “Jmook” DiRado, Edgard “n0ne” Sheleby, Josh “Joshman” Lyras and Johnny “S2J” Kim during the first half of the year. He has also beaten John “KoDoRiN” Ko and Shephard “Fiction” Lima since the end of the season. This suggests Mang0 could have what it takes to climb back into the MPGR top 10 by the end of the year.

This year’s summer rankings have also included a number of other historic developments. For example, Dan “Swift” Petruso has ended Jeffrey “Axe” Williamson’s nearly 12-year tenure as the best Pikachu player in the world. The Summer 2022 MPGR reveals will conclude with the top 10 players on Thursday.