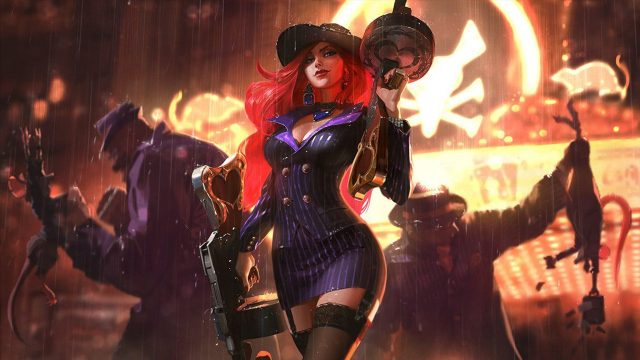 Provided by Riot Games Miss Fortune is one of the champions receiving nerfs in LoL's patch 11.21.

League of Legends patch 11.21 goes live tomorrow and features major Goredrinker nerfs, several champion changes and /all chat being disabled in matchmade queues. The champion changes include buffs to Viego, Xayah, Teemo, Sion, Jinx and Lux. There are also minor adjustments to runes and other items in patch 11.21. Riot Games has also decided to nerf Miss Fortune as she continues to dominate the rift at Worlds 2021.

The Goredrinker mythic item has slowly taken over the Rift as a perfect fit for many AD champions. In all 24 games that Lee Sin was played in during the Worlds 2021 group stage, Goredrinker was purchased 100% of the time. The item also had a 100% buy rate on Xin Zhao and was the second most bought item on Qiyana. In the new meta, Goredrinker has gone from being a bruisers-only item to an assassin favorite. Considering all of this, the nerf to the mythic item on LoL Patch 11.21 is no surprise.

The Goredrinker changes include:

The League of Legends patch 11.21 comes with nerfs on some popular champions. Riot decided to stop Akshan’s rise and popularity on the rift with a damage decrease on his E (Heroic Swing). Graves is another champion seeing nerfs with a decrease to the bonus armor granted by his E (Quickdraw).

Furthermore, Miss Fortune is getting a hit to her early game with a mana cost increase on her W and a base mana reduction. This will force the champion to pick early shots more carefully. Finally, Quinn’s W bonus attack speed is being decreased to ensure fair fights against opponents in top lane duels.

After the nerfs done to Viego reduced his power too much on the Rift, Riot has decided the champion needs some buffs to stabilize. The damage ratio for Viego’s Q (Blade of the Ruined Kind) is being increased to 70%. Additionally, the champion’s W self-slow is now at 10% and there is a 25% increase in his R’s critical strike.

Aside from Viego, Xayah and Sion also received buffs in patch 11.21. Xayah’s base move speed is now 330 with her Q cooldown decreased. Lux also received a base attack-speed-per-level increase while Jinx’s passive attack speed and E all got buffs. All of these champions, and especially Jinx, have struggled to get game time in the new meta.