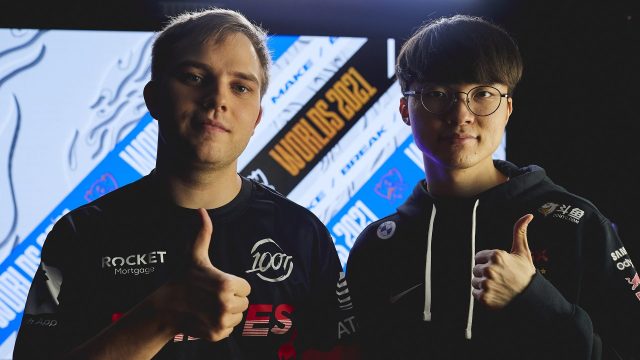 There are still four days of games left, which leaves plenty of time for underperforming teams to turn things around and those in the lead to stumble. Here are Upcomer’s updated Worlds 2021 power rankings based off of Group Stage performance.

The LPL first seed has proven that snagging the trophy this summer was no fluke. Zhao “Jiejie” Li-Jie, in particular, is putting on a stellar performance.

The 2021 MSI champions haven’t quite reached their peak, but they’re still strong enough to go 3-0 in the first round-robin.

T1 have seen unexpected improvement from their jungler so far. Moon “Oner” Hyeon-joon was a bit quiet this summer, but he’s really stepping up when it matters.

LNG’s topside has impressed all tournament long. It’s a pleasant surprise to see them carry their momentum from play-ins into groups. I’m sure it also helps that MAD and TL are underperforming.

Yes, FPX haven’t looked nearly as sharp as we know they can be in the group stage, but where have we seen this before? It was the same story in 2019, and they ended up walking away with the trophy. Let’s just see Kim “Doinb” Tae-sang on more impactful picks.

As League of Legends Champions Korea caster Maurits “Chronicler” Jan Meeusen put it in our last power rankings, “Gen.G is going to do the most Gen.G thing possible by making everyone upset by stomping their group and then not doing anything else in the tournament.”

In my Pick’ems, I called out PSG as a team that could very realistically advance to top eight, and they’re doing just that. PSG support Ling “Kaiwing” Kai Wing is confident that they can make a statement at Worlds 2021. They also haven’t moved a spot from our initial Worlds 2021 rankings.

While Jeong “Chovy” Ji-hoon hasn’t necessarily been bad, as the team’s engine and one of the world’s best, he will need to take his play (in-lane and across the map) to the next level if he wants to make his third straight worlds knockout stage.

There have been few better AD carries this event than Rogue’s Steven “Hans Sama” Liv, the French marksman being one of the few silver linings so far for not only Rogue but the entire Western region.

The biggest contender for biggest disappointment of Worlds 2021. Heading into Worlds, they were the hope of the EU. Even though they are 1-2, the group is still up for grabs, but time is running out.

This team is a mess. Although they were able to stick around in their game against FunPlus Phoenix, they have not shown any consistency.

The Wildcard darlings of Worlds 2021. DetonatioN FocusMe are just happy to be here, but they are definitely able to play spoiler in Week 2.

Yep. Their very close back and forth game against PSG Talon makes you wonder what could have been if they had Elias “Upset” Lipp been there instead of their untested rookie, Louis “Bean” Schmitz (who hasn’t been that bad actually).