Hope and Missing got schooled in the semifinals, but it's a lesson the duo can learn coming into 2023 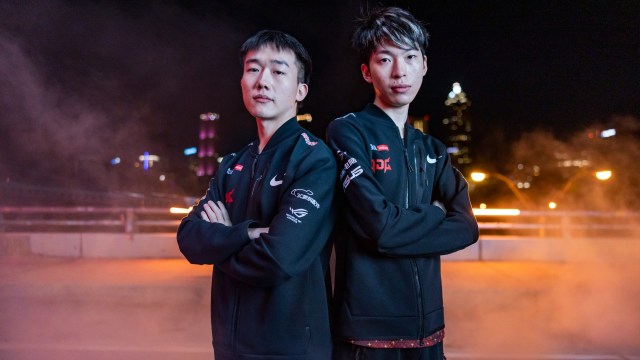 Provided by Riot Games/Getty Images/Fernando Decillis Hope and Missing were a bright spot in JDG's return to prominence.

After JD Gaming’s Worlds 2020 run that saw them bow out in the quarterfinals, hopes were high going into 2021 as JDG were clearly a mark above of the other teams in the League Pro League. However, as other teams stepped up, JDG stepped back. The team failed to qualify for the 2021 summer playoffs and were eliminated from Worlds 2021 contention. But after revamping their roster heading into 2022, Hope was there, both literally and figuratively.

2022 turned out to be even more successful than JDG’s 2020 campaign — and a big part of that was the emergence of their bot lane Wang “Hope” Jie and Lou “Missing” Yun-Feng. The two members of JDG’s bot lane had career-creating years. And along with their new top laner Bai “369” Jia-Hao having a career-defining one, and of course Zeng “Yagao” Qi and Seo “Kanavi” Jin-hyeok stepping up, JDG returned to prominence after a terrible 2021 campaign. But while Hope and Missing breaking out did not claim the summoners cup in 2022 after losing to T1 in the semifinals, they do give the JDG hopeful something to look forward to heading into 2023.

Before joining JDG, Hope was bouncing around Edward Gaming’s academy roster and main roster. He even got play time on EDward Gaming during the 2020 campaign but when the team picked up Park “Viper” Do-hyeon in 2021, Hope didn’t really have a place in the LPL. But after a year back in Academy, JDG took a chance on the still-young bot laner and it paid off. Deep into JDG’s summer playoff run, Hope was tasked with keeping the first-team all-pro bot laner Yu “JackeyLove” Wen-Bo in check. And over the 10 games against him, he did. In every single game of those two five-game sets, Hope not once had a negative KDA. And in both series, JDG won.

But it’s not like Hope was doing things solo in the bot lane. He had a lot of help with his new support player, Missing. Before joining JDG at the beginning of 2022, Missing had spent the last couple of years on Team WE but never really accomplished anything. But while he was definitely a serviceable support, JDG turned him into a world-class one. Capturing the second-team all-pro support honors in the 2022 LPL summer split, Missing was arguably the best support in the entire league; he showed it in the playoffs as JDG picked up the LPL one-seed just a year after not even making playoffs.

As one of the favorites to hoist the Worlds 2022 title, Hope and Missing knew they would have to continue to exceed expectations. In the group stage, the duo didn’t have to play against the best bot lanes in the world, but they made it clear that they were a cut above, even outside of their region. After taking the first seed in their group with a 5-1 record and a tiebreaker win, JDG dismantled their quarterfinal opponent, Rogue who has a considerably better bot lane than what was in JDG’s group but the result was the same.

However, in the semifinals, they finally played against the arguably best bot lane in the world. And frankly, were outmatched. Even in a 3-1 loss to T1’s Lee “Gumayusi” Min-hyeong and Ryu “Keria” Min-seok, Hope and Missing held their own; but the skill gap was too wide. After a weird Jhin pick in Game 4, the gap was made very apparent. JDG’s coaching staff agreed that the bot lane meta read was in T1’s favor.

“You guys did great and if I did better, you could have won; I’m really sorry,” head coach Yoon “Homme” Sung-young said. “Don’t feel small, get good rest, next year believe in yourself and keep working hard.”

While the coaching staff took the blame, Missing specifically stated that the biggest reason why he improved so much over the year was thanks to them.

“We have a very good atmosphere within the team and also our coaching team offered us great help,” Missing said. “That’s the reason why we grew together and qualified for Worlds.”

As for what the future holds for JDG, the bot lane and 369 are under contract through 2023. And while roster moves are bound to happen — even to this squad — if these three players stay and continue to improve, JDG could very well find themselves back at Worlds next year taking a step forward. And with a semifinals appearance under their belt, that step could grant them a Worlds 2023 title.