What to know about the likelihood of such a crossover 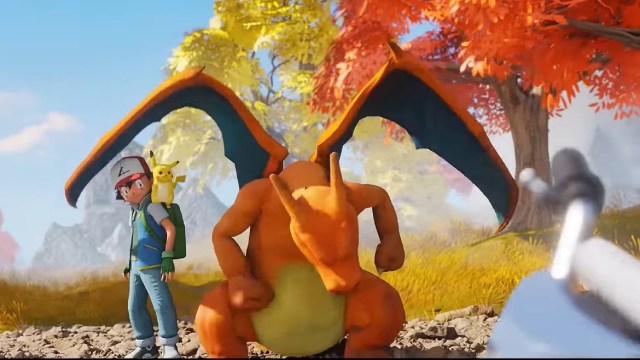 Screengrab provided by YouTube via FeraalsVFX Ash, Pikachu and Charizard appear in a fan-made trailer.

Many Fortnite fans are looking out for a crossover with Pokémon protagonist Ash Ketchum. Ash has seemingly been at the forefront of popular culture ever since The Pokémon Company announced his retirement from the Pokémon anime. Ash and Pikachu’s storyline will officially conclude during an 11-episode miniseries that will air in Japan starting on January 23, 2023.

Despite possibly leaving the anime behind, rumors have begun to circulate that Ash Ketchum’s time in the spotlight might not be completely over. Here’s everything to know about whether there will be a crossover between Fortnite and the Pokémon franchise.

Rumors that Pokémon characters might be on their way to Fortnite became particularly prevalent on January 7, 2023. YouTuber and animator FeraalsVFX garnered lots of attention after posting a video that appeared to depict a new Fortnite crossover.

In the trailer, Fortnite’s banana skin Peely rides a motorcycle while trying to escape from a truck that is chasing him. However, Peely and the truck both stop in the middle of a gravel road when they find Ash Ketchum and Pikachu standing in the road. Ash then throws a Poké Ball and summons his Charizard, which proceeds to destroy the truck with a Fire-type attack.

The trailer is, of course, fan-made. This is apparent due to the fact that it was not posted by an official Epic Games account. In addition, the Charizard model that appears in the trailer is not original. Instead, it comes from the Bandai Namco fighting game Pokkén Tournament.

Is Pokémon coming to Fortnite?

Though this particular trailer is fake, the question still remains of whether a crossover between Fortnite and Pokémon could happen in the future. As of now, Epic Games has not officially confirmed whether such a crossover would be possible.

On the surface, it seems conceivable. After all, popular anime like Naruto and Dragon Ball have already made their way to the world of Fortnite. However, there’s one very big reason why such a crossover with Pokémon is ultimately unlikely to happen: Nintendo.

Fortnite has never had a crossover with any Nintendo franchise. Although leaked documents from the Epic Games v. Apple court case suggested Samus Aran from Metroid was on her way to Fortnite, Nintendo ultimately declined to license the right to use Samus to Epic Games. Rumors indicate that Nintendo would not let Samus join Fortnite unless she was a Nintendo Switch-exclusive skin, which Epic Games would not agree to.

Sources tell me that a Metroid (Samus Aran) collaboration will not happen next season.

Apparently, Epic wasn't able to obtain the rights to put her in the game.

While Nintendo does not directly work on the Pokémon anime, it is still a parent company of The Pokémon Company, which is in charge of all of the marketing for the Pokémon franchise. As a result, fans shouldn’t expect Ash or any other Pokémon characters to come to Fortnite any time soon.