How to watch the TFT Dragonlands NA Regional Finals

How to watch the TFT Dragonlands NA Regional Finals 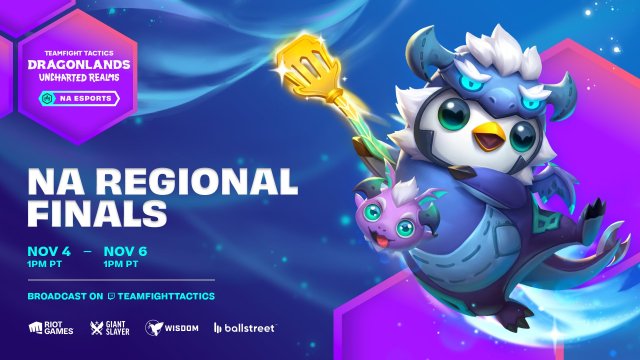 Not only is this weekend the League of Legends Worlds 2022 finals, but it is also a look at the potential Teamfight Tactics world champion too.

The TFT Dragonlands North American Regional Finals kick off live starting on Friday, November 4 as the 24 best players from NA fight it out to see who will represent their region a the TFT Dragonlands Championship. Here are all the details you need to know to follow the action including format, players, and of course, where to watch.

Tune in on November 4-6 at https://t.co/vgKVPFaoHC for the $25,000 clash to see who will contend among the world's best tacticians! 🗺️ pic.twitter.com/XNt8j7IKJJ

The 24 qualified players will be split into three separate lobbies on Day 1 of the competition. Once split into these three lobbies of eight players each, all players will play six games earning points based on placements in each game with lobbies being shuffled after every two. The top 16 players with the most points following the six games will move on to Day 2.

Day 2 begins with the 16 players coming back for six more rounds. Like Day 1, lobbies will be shuffled every two games and players will still fight for points based on each game’s placement. The top 8 players from Day 2 will move on to the Day 3 finals.

To end the tournament, the final eight players will simply play a six-game series. The top two players with the most points at the end of the six games will qualify for the TFT Dragonlands Championship. The twist is that a third player will join them but that player will be the one with the best average placement across the entire event which rewards consistency over the three-day tournament. And finally, the two remaining highest-ranking players will qualify for the Western Last Chance Qualifier.

This tournament is stacked with the 24 best performers from the entire six-month Dragonlands season. There are many notable names that are playing in this event.

The most popular streamer and the 10th and final points qualifier Cloud9’s Michael “k3soju” Zhang will be trying to qualify for his first world championship.

On the opposite side of the spectrum, five former world championship competitors will also be playing this weekend including the last three NA champions, Jeffrey “Milk” Pan, Robin “robinsongz” Sung and Alex “Kurumx” Tompkins the last two are playing for esports orginization Team Liquid.

How to watch TFT Dragonlands

Adventure is afoot, so we've prepared top-class talent to guide you to your next destination.

The three-day event will be broadcast live on the Teamfight Tactics official twitch channel and will feature play-by-play and analysis from the talent desk. The competition starts at 4pm ET each day from Friday through Sunday.