How to get free toasts through MultiVersus Twitch drops - Upcomer

How to get free toasts through MultiVersus Twitch drops 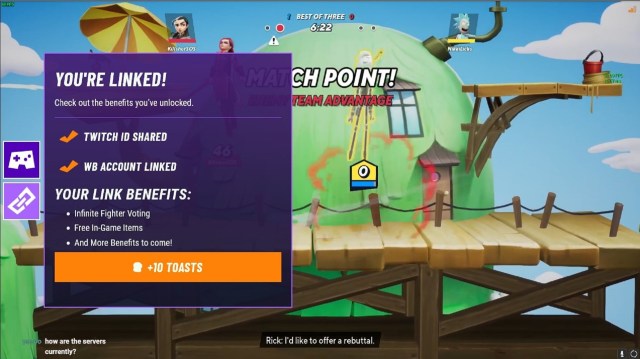 Screengrab provided by Twitch via NikkiLicks Viewers can interact with a pop-up menu while watching a streamer who has enabled the MultiVersus Twitch extension.

Nearly a year after his first leak, Rick Sanchez has finally joined the MultiVersus roster. Along with him, Player First Games has added a handful of changes to the game’s Twitch extension. These changes updated the kinds of rewards available through MultiVersus Twitch drops.

In particular, this update allows players to get toasts, which they can offer to their opponents as a sign of good sportsmanship. Here’s how MultiVersus players can obtain free toasts through Twitch drops.

At the top of the list, users will see the option to link their Twitch account. By clicking “Connect,” the user will be redirected to Twitch, where they can sign into their account. Then, they must click “Authorize” at the bottom of the next screen. Afterward, the two accounts will be connected to each other.

How to get free toasts through MultiVersus Twitch drops

Clicking on the link icon will open up a menu where players can share their Twitch ID with MultiVersus. As long as they have already linked their Warner Bros. account to their Twitch account, then clicking this button will automatically make the player eligible to claim rewards. In particular, players who share their Twitch ID will be able to immediately receive a gift of 10 toasts.

The free toast gift is not currently repeatable. However, the menu says that there are “more benefits to come,” potentially including additional free in-game items. In addition, players who have shared their Twitch ID will have infinite fighter voting when they watch a streamer who has enabled the Twitch extension. This means that they can repeatedly vote on what character they would like to see the streamer play next.