A new form of currency in Season 1 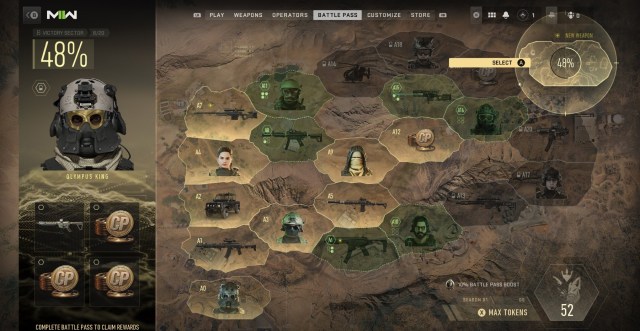 Provided by Activision Call of Duty: Modern Warfare 2 screenshot of the Battle Pass.

One of the best parts about any new Call of Duty season is seeing the new Battle Pass. The pass features dozens of cosmetic items and usually a couple of free weapons that players can unlock and use in multiplayer and Warzone. This year, Activision has decided to kick the old version of the Battle Pass and go for a more modern approach. In Call of Duty: Warzone 2 and Modern Warfare 2 Season 1, players can choose what they want to unlock off of the Battle Pass instead of being forced to go through all 100 tiers. However, in order to do that, players need to earn and use Battle Pass Tokens, which can be earned in both Warzone 2 and MW2.

Battle Pass Tokens are essentially Tier Skips from previous years. Players can use them to unlock different Sectors of content and the actual content within each Sector. Think of it like this: you need 120 total Battle Pass Tokens to unlock all of the content within the Season 1 Battle Pass. In order to earn those tokens, you’ll need to play a lot of Warzone 2 and MW2. We’ll explain further in the guide below.

The easiest way to earn Battle Pass Tokens is to simply play both Warzone 2 and MW2. Players will earn more and more tokens as they continue to play either game. The tokens are shared across a player’s account as well, so if they earn tokens through playing Warzone 2, they can still use them in MW2. Currently, there’s no in-depth analysis on how much players have to play to earn the necessary amount of Battle Pass Tokens they’ll need to unlock all of the Battle Pass content.

The second way to earn tokens is to purchase the Vault Edition of MW2. By purchasing this edition, players don’t have to pay for the Season 1 Battle Pass and they unlock 50 Battle Pass Tokens immediately. The Vault Edition costs $100, though, so it’s not a cheap investment.

Finally, the last way players can unlock tokens is to physically buy them with COD Points. Once again, this is not a cheap way of going about things, but it is the fastest way to unlock every Battle Pass item. You can purchase Battle Pass Tokens by going to your Battle Pass tab. You can also see how many tokens you have in the bottom-right of the Battle Pass screen.