Genesis 9 schedule — Where to watch and more - Upcomer

Genesis 9 schedule — Where to watch and more

How to watch one of the most important Smash tournaments 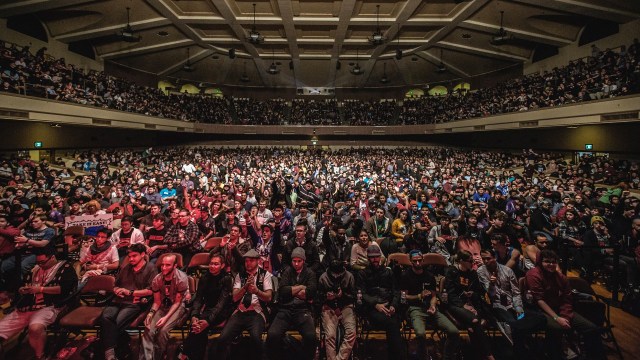 Photo by Robert Paul, provided by Genesis A large crowd prepares to spectate Championship Sunday at a previous Genesis tournament.

Genesis 9 is coming to San Jose, California, this weekend. The Genesis 9 schedule will feature Super Smash Bros. Melee and Ultimate, Super Smash Bros. for the Nintendo 64, Guilty Gear Strive, Rivals of Aether, Rushdown Revolt, and more, with thousands of players competing across these games.

As one of the most important major tournaments every year, Genesis is a must-watch for any competitive Smash fan. Here’s everything there is for viewers to know about the Genesis 9 schedule and how to watch the event.

Stream schedule will be up shortly.

We will also be releasing a pdf with event/stream schedule combined for easy viewing, but this will do for now!

The Genesis 9 schedule begins at 1 p.m. ET on Friday with Singles and Doubles pools for both Melee and Ultimate, as well as Rivals of Aether Doubles pools. Guilty Gear Strive pools will kick off at 3 p.m., followed by Rushdown Revolt pools at 5 p.m. Doubles top six for Rivals of Aether will also begin at 5 p.m., along with round two pools for Melee and Ultimate Doubles.

Singles pools for Rivals of Aether will begin at 7 p.m. on Friday. Later, Ultimate Doubles top eight and Melee Doubles top 16 will start at 9 p.m. Day one will conclude with a pair of special events at 11 p.m.: a live Fourside Fights broadcast and Japan vs. Mexico crew battle in Ultimate. Meanwhile, round two pools for Guilty Gear Strive will also kick off at 11 p.m.

At 5 p.m., viewers can catch the beginning of Smash 64 Singles pools, Rushdown Revolt top 32 and Guilty Gear Strive top eight. Then, Rivals of Aether top 48 will start at 7 p.m. Finally, Melee and Ultimate top 64, Smash 64 top 16 and Rushdown Revolt top eight will all start at 9 p.m. on Saturday. There will also be a number of side brackets throughout the day on Saturday for games like Dance Dance Revolution, Magical Drop 3, Windjammers 2, and more.

How to watch Championship Sunday

The final day of competition on the Genesis 9 schedule will kick off at noon on Sunday with Rivals of Aether top six. After a short break, Melee Doubles top four will start at 3 p.m., followed by Melee Singles top eight at 5 p.m. Finally, the tournament will conclude with Ultimate Singles top eight, which will begin at 10 p.m. on Sunday.

As of now, the Genesis tournament organizers have not released a stream schedule. However, past iterations of the tournament have been streamed by Beyond the Summit’s various btssmash Twitch channels. Meanwhile, the official Rivals of Aether Twitch channel will likely broadcast the Rivals brackets at Genesis.