DK gave it their all and pushed Gen.G to the brink but it wasnt good enough in Game 5. 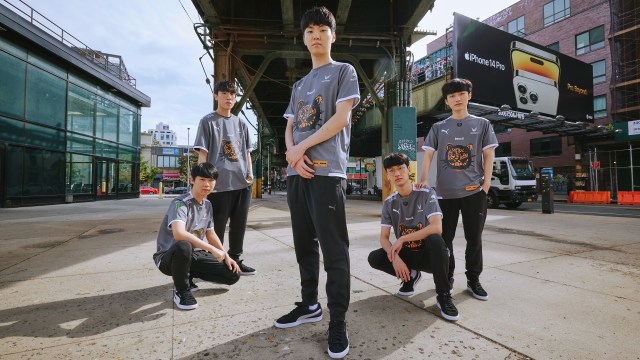 Provided by Riot Games/Getty Images/Lance Skundrich Gen.G stand tall after a crazy back and forth duel with DWG KIA.

In what was looking like another boring three-game sweep, Gen.G and DWG KIA instead delivered an all-time great best-of-five series on Day 3 of the League of Legends Worlds 2022 quarterfinals. With DK on the verge of a reverse sweep, Gen.G shut that down to advance to the semifinals.

DK committed the cardinal sin of 2022 in the draft during the first game of the series, they left Yuumi open. As the most polarizing champion the current metagame and now the best win rate in entire tournament, leaving the cat open is reckless at best. With the onus on DK to find the out to the cat, they failed. The Gen.G bot lane, who are already considered one of if not the best in the world, had a field day with Yuumi as Son “Lehends” Si-woo went 0/0/14 on the champion as Gen.G won Game 1 in under 26 minutes.

DK left Yuumi open again in Game 2 confident they can keep it in check. And while they were competitive throughout, they forgot that the player they needed to keep in check was the number one player in the world, Jeong “Chovy” Ji-hoon. With Chovy on Yone, there was no stopping the inevitable.

To put it simply, Chovy was a monster. Although DK tried their hardest to wipe Gen.G off the map,  they never were able to get Chovy. It wasn’t pretty but with the team on Chovy’s back, Gen.G took game two to put themselves at match point.

In Game 3 DK learned their lesson with Yuumi and finally decided to ban it. But the issue of chovy remained. But It’s not like DK doesn’t have a world class mid laner of their own. In Game 3, Heo “ShowMaker” Su had enough of Chovy stealing his spotlight. The pivotable moment in the early game saw Chovy walk up to Showmaker to try to kill him in a one versus one battle.

But instead, Showmaker made Chovy look silly. In one of the cleanest outplays in recent memory, Showmaker’s Swain was must watch as he laid waste to Gen.G to push the series to Game 4.

Game 4 finally saw DK contain Gen.G’s win conditions. And with Gen.G now playing off the back foot, DK smelled blood in the water. With DK’s jungler Kim “Canyon” Geon-bu coming alive and their bot lane duo of Seo “deokdam” Dae-gil and Kim “Kellin” Hyeong-gyu outplaying Gen.G’s bot lane, Game 4 was a decisive victory for DK as they ended it in less than 25 minute to bring the New York City audience to Silver Scrapes.

Game 5 saw Chovy come alive once more but DK were allowed to keep him rather contained despite Gen.G still having a lead, but it was manageable. In the mid-game, Canyon and Showmaker activated their clutch gene, which brought the game back to even where it remained until the 40 minute mark.

With the game being decided by the next teamfight, both teams threw the kitchen sink at each other but with dead bodies everywhere, it wasPark “Ruler” Jae-hyuk with a quadra kill that pushed Gen.G to the semifinals denying DK the reverse sweep.

DK has now been eliminated from Worlds 2022 title contention while Gen.G awaits the winner of Edward Gaming and DRX.