The Gaimin Gladiators are here to prove that they are worthy of hoisting the Aegis. 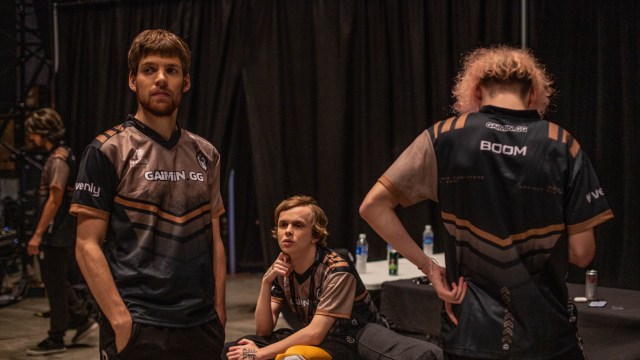 Out of all the stories to come out of the Dota Pro Circuit (DPC) this year, one of the most prominent is the rise of the Gaimin Gladiators. Coming in as Team Tickles in early 2022, the team came in and immediately dominated the Western Europe region. They came out of nowhere to challenge for the spot of top team in the region. Their efforts throughout the season was rewarded with a direct invite to the International. Two primary members of this team are Marcus “Ace” Hoelgaard and Erik “Tofu” Engel, who talk to Upcomer about their early success, their direct invite and their goals heading towards the International 11.

The Gladiators started out as Team Tickles, a stack of relatively unknown players. The only player on the team that had prior experience was Ace, who played carry on Team Secret. However, Ace would take on a different role on this team, playing offlane for Team Tickles.

The magic that Team Tickles was able to conjure was a combination of the entire Western Europe region underestimating them and a group of very hungry competitors coming together to perform well.

“When we started, everyone was struggling to find teams or had different options coming in” reflected Tofu on the Gladiator’s first season. “We ended up with a really good work ethic and a lot of teams underestimated us.”

Right before the first regional final of the DPC, Team Tickles would get picked up by the Gaimin Gladiators and would end up placing first. An amazing start for a team that was formed only a few months before.

Coming off early success and a recent downturn

The early success from the first DPC tour carried onto the second and the Gladiators once again finished top 2 during the season, narrowly losing to OG Esports. However, the gladiators ended their third tour in sixth place, an uncharacteristic drop for a historically consistent team. However, Ace and Tofu explained that a variety of factors played a role in their recent results.

“In the last tour (tour 3) there was this vibe that we had already qualified for The International,” Ace said. “I think people were slacking a bit even if they didn’t want to.”

After joking with each other that it wasn’t any of them that lost the motivation, Tofu added that the qualification can take away some drive. He also brought up the fact that teams were more prepared for them considering their recent success.

Gaimin Gladiators look ahead to The International 11

The Gladiators now look ahead to The International, the largest tournament of the year. Historically, teams that are perceived as strong coming into the International have a tough time making a run due to the target on their backs. The Gladiators have been quietly lurking, waiting for their moment to show the world just how good the team can be.

Coming into The International 11, Ace and Tofu believe that China and Western Europe look like the strongest regions. When asked which teams were at the bottom, they believed it was between North or South America. In their opinion, South America has taken a leap this year, which leaves North America at the bottom. With Eastern Europe and Southeast Asia taking the two middle spots.

With no pressure on their shoulders, Gaimin Gladiators enter The International 11 as one of the dark horses and could definitely upset the field. They performed well at ESL One Stockholm and Gamers Without Borders, placing top 4 in both those tournaments. They have proven that they have what it takes to compete with some of the top teams in the world, but now they will have to prove themselves on the biggest stage, against the best teams.