First look at the Overwatch 2 Battle For Olympus skins

First look at the Overwatch 2 Battle For Olympus skins 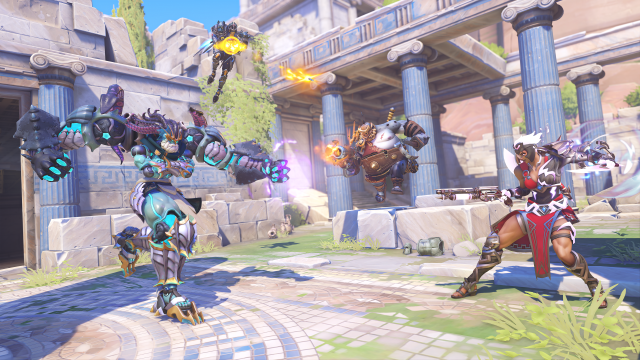 Provided by Activision-Blizzard. The new skins in Overwatch 2 fighting each other in the Battle for Olympus game mode.

With a new limited-time Battle for Olympus game mode coming out in Overwatch 2, some new Greek god-themed skins are coming to the in-game store. Including the similarly designed skins already in the Season 2 Battle Pass, here is a list of all the Olympus skins, including the new ones.

To start, we have the Greek god-themed skins that many players have already unlocked through the Season 2 Battle Pass. First off, we have the Poseidon Ramattra skin, which is unlockable at Tier 20 of the pass.

Then, we have Hades Pharah, unlockable at Tier 60 of the pass.

Last but not least, the final pass skin is the Mythic rarity Zeus Junker Queen, unlockable at Tier 80 of the Season 2 Battle Pass.

The new game mode introduces more skins via the store

Where those Overwatch 2 skins are unlockable through the pass, the new Battle for Olympus game mode also coincides with a bunch more skins coming out. All skins below are already available in the store, even with the game mode starting the day after, on Jan. 5.

Continuing the Greek god theme, it all starts with Hermes Lucio, available from the store in a bundle for 2000 Overwatch Coins. The bundle includes the Winged Sandals weapon charm.

Then, the next skin in the store is the Minotaur Reinhardt skin. This skin is also part of a bundle for 1900 Coins, including a Minotaur spray.

Another skin as part of this release is the Medusa Widowmaker skin. As part of a bundle for 2200 Coins, it comes with the Petrified Hammond souvenir and a unique Death Stare highlight intro.

Lastly, the final skin in the store is the Cyclops Roadhog skin. His bundle costs 2200 Coins as well, coming with the On the Shoulder victory pose and the Crushing Blow highlight intro.

All of these skins will be included in the game mode to use, but to keep them past it, you’ll need to either unlock or purchase them in the store.