Everything to know about the TFT Dragonlands NA LCQ

Everything to know about the TFT Dragonlands NA LCQ 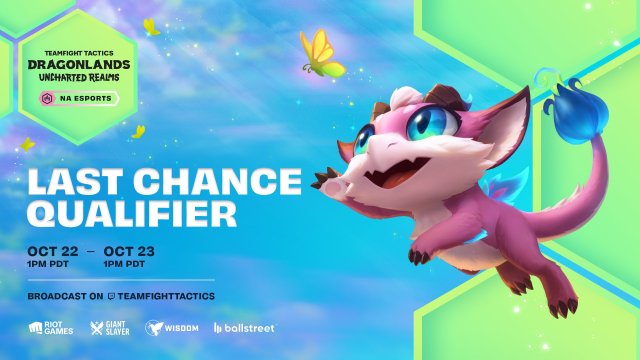 Provided by Riot Games The final tournament before the NA Regional Finals is here.

With the Teamfight Tactics Dragonlands season reaching its home stretch, it’s almost time to see which players will be playing at the TFT Dragonlands Championship in late November. But first, we have to find out who will be playing in each region’s qualifier tournament. 22 of the 24 spots at the North American Regional Finals are full; 16 of the region’s best will battle for a chance for the final two spots at the North American Last Chance Qualifier. Here are all the details about the format, who is playing and where to watch the TFT Dragonlands NA LCQ.

The TFT Dragonlands NA LCQ will take place over the course of two days with all 16 players playing on Day 1. The 16 players will initially be split into two separate lobbies and will play six games total. Every two games will have the lobbies reseeded. Players will be fighting for points distributed after each game in standard fashion, with first place in each game receiving eight points and the rest of the placements getting points in descending order. After the six games, the top eight players will move on to the finals on Day 2 but with a twist. The top three players entering Day 2 will do so with a point head start. Three bonus points will go to the player who finished in first, two will go to second place, and one will go to third place.

Day 2 will have points reset except the bonus points. The eight remaining players will simply play a six-game set. The top two players will earn the final two spots at the Dragonlands NA Regional Finals.

The 16 players have already been decided. The players were chosen through a sign-up period in which the top 16 players based on in-game ladder rank would make the final cut. Among the 16 players, there are a few notable entries that players should keep an eye on.

TSM’s Duy “Souless” Nguyen will try to qualify for the regional finals after barely missing out on the Gizmos and Gadgets Championship last set. At last season’s NA Regional finals, Soulless finished 6th but is in danger of not qualifying for this set’s regional finals.

Complexity’s Emily “emilyywang” Wang is looking to qualify for her first-ever NA Regional Finals after having a stellar season on the ranked ladder. She is the 9th seed heading into this LCQ.

Other notable names include Daniel “DQA” Li who has been the TFT world champion twice; once back in TFT Fates and again last season in TFT Gizmos and Gadgets. Sully “Spicyappies” is the number one seed entering this event and has been one of the best performers in TFT over the course of the last two sets.

The Last Chance Qualifier talent have appeared from the dragons' smoke! 🔥

The TFT Dragonlands NA LCQ kicks off live on Saturday, October 22 at 4 PM ET and again on Sunday, Oct 23 at the same time.