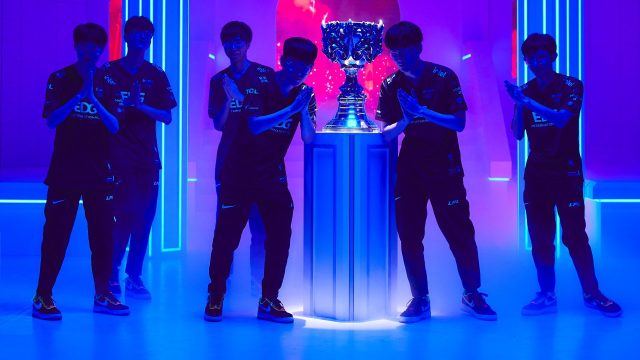 Update: T1 have advanced out of Group B as the first-seed with a 5-1 record, and Edward Gaming have advanced as the second-seed with a 4-2 record. The teams will play in the knockout stage next weekend. The original story published at 8:39 ET follows:

Edward Gaming and T1 advanced out of Group B and into the knockout stage of Worlds 2021 on Saturday after T1’s victory against 100 Thieves in the second match of the deciding day and EDG’s win over Detonation FocusMe.

The day started off with EDG locking in their spot after a win against Japanese squad DetonatioN FocusMe. China’s No. 1 seed improved to 4-0 in the tournament, which meant neither of the bottom teams could catch up to them. The only question now is if EDG can remain unbeaten in the group and secure the top seed out of Group B.

EDG have started off the Worlds 2021 tournament with wins against every team in their group and two against DFM. Their opening match of the tournament against the League of Legends Champions Korea third-seed was specifically impressive due to T1’s prestige.

Now, the top team in the League of Legends Pro League has a chance to push away its muddled history at Worlds. EDG have not advanced past the quarterfinals in their five previous trips to Worlds. Their 2017 trip was particularly painful as they finished 2-4 in the group stage despite being the top seed from the LPL.

EDG will be looking to erase the stigma of being a team that chokes at Worlds 2021. They are off to a good start in doing so. After a losers bracket run in the LPL finals, EDG made quick work of FunPlus Phoenix in the finals. In fact, since their loss to Team WE in the upper bracket of the domestic tournament, EDG have only lost two games in their last 15 making their record 13-2 in that time.

In their four wins at Worlds 2021, EDG have outclassed all of their opponents. Every single of their games, they crippled the map away from their opponents.  The most towers an opponent has talked against EDG has been three which was against T1. That game still ended with EDG being more than 10k gold ahead when they won.

Their superstar bot laner, Park “Viper”  Do-hyeon, has been on a tear. Rated as the number one ranked bot laner coming into the event, the LPL spring split MVP has lived up to the hype. Through four games, Viper has not died and has had a perfect K/D/A.

T1’s journey at Worlds up to this point

T1 came into the event expected to make it to the knockout stage. Although they got outclassed in their first match against EDG, T1 showed up against their weaker competition. After their second win against 100 Thieves, T1 clinched their spot in the knockout stage. This is because, with their win, T1 are 2-0 against the North Americans, which gives them the head-to-head tiebreaker. T1 can finish no lower than 3-3, and 100 Thieves can only climb to 3-3.

T1’s Worlds 2021 so far has been pretty boring. After hanging around a little with EDG, T1 turned around and bullied 100 Thieves and DFM. In their opening match of Worlds 2021, T1 defeated DFM in 19 minutes, before Baron even spawned. In that game, DFM failed to take a single tower and T1 won in the kills department 22-2.

T1 jungler Moon “Oner” Hyeon-joon carried the day in that game as he posted an 11/1/6 KDA (kills/deaths/assists) on Talon.

T1’s legendary mid laner Lee “Faker” Sang-hyeok will be looking to capture his fourth world title and now has made it to the knockout stage in each of T1’s six Worlds appearances.