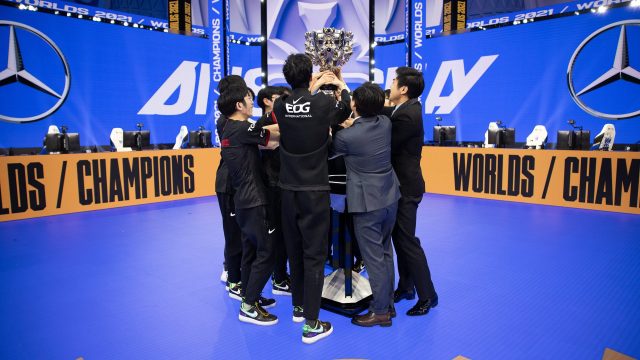 EDG capped off a historic tournament run with their first-ever Summoner’s Cup. Heading into the tournament, EDG were among the tournament favorites, but they didn’t look like it for most of the event. They struggled in the group stage and took two lesser teams to Game 5s. But in the finals the EDG people expected to show up, did.

EDG made it past the quarterfinals for the first time in the organization’s history at Worlds 2021. They soared past everyone and made their first time past the top eight counted. Not only did EDG break their own curse and make organization history, but they also made League of Legends history. EDG became only the second team ever to win a Mid-Season Invitational tournament and a world championship.

After a perfect group stage, DK swept their quarterfinals match against MAD Lions. However, they were tested by T1 in the semifinals. In a series that seemed to really pass the torch to the next generation of League of Legends Champions Korea greatness, DK clutched out a five-game series against T1 to put themselves in the finals. However, the stumbles they made against T1 showed themselves again in the final.

After seven years, EDG top laner Li “Flandre” Xuan-Jun got to Worlds for the first time in his career. He now leaves as a world champion. Mid laner Lee “Scout” Ye-chan, AD carry Park “Viper” Do-hyeon and support Tian “Meiko” Ye also finally get a championship to hang on their mantle after multiple Worlds trips. Edward Gaming jungler Zhao “Jiejie” Li-Jie, at only 20 years old, was able to claim the Worlds 2021 title in his first full year as a starter.

DK enter the offseason with questions to answer after nearly launching the next great South Korean dynasty. Their two superstars, mid laner Heo “ShowMaker” Su and jungler Kim “Canyon” Geon-bu, will be free agents as of 8 p.m. ET on Nov. 15.

The series started with a surprise as EDG jumped out to a 1-0 series lead behind Meiko’s Zilean pick and standout performances from across the board. The Chinese squad finished the game with a 16-4 kill advantage over the 2020 world champions, with EDG top laner Flandre posting a deathless 4/0/7 KDA (kills/deaths/assists) on Graves.

DWG KIA woke up in Game 2 and refused to let EDG’s statement in the opener become the story of the match. With ShowMaker on Malzahar (5/1/10 KDA), the South Koreans found frequent picks to start fights, and DK top laner Kim “Khan” Dong-ha showed Flandre that he could play Graves just as well with a deathless 7/0/6 performance of his own on the champion. Canyon tied Khan for the most kills in the game with a 7/1/8 on Qiyana, and other than a Baron steal and another near-steal by Edward Gaming jungler Jiejie, the game was decisively DWG KIA’s throughout.

Game 3 was more competitive, with EDG holding the advantage in the early game. However, China’s No. 1 seed left one of Canyon’s signature champions throughout Worlds 2021, Lee Sin, open in the draft, and the jungler eventually made Edward Gaming pay for it. He wasn’t the star of the show this time around, though, with DWG KIA putting together a team effort behind ShowMaker’s 5/1/4 KDA on Sylas and AD carry Jang “Ghost” Yong-jun’s 5/0/4 split on Aphelios.

A back-and-forth Game 4 focused around objective control with only five kills by the 25rd minute. EDG, however, took a 3-0 lead in dragons by that time behind an excellent jungle performance from Jiejie, a 20-year-old star competing at his first world championship. The way Edward Gaming claimed the Mountain Soul showed that prowess: Despite DWG KIA taking ownership of the dragon pit, Jiejie dashed in on his Viego and stole yet another neutral buff from Canyon & Co. His 2/0/4 performance in the jungle sent one of the most competitive Worlds finals toward an appropriate end.

EDG once again jumped out to an early lead in Game 5 with three kills by 15 minutes, but a turnaround by ShowMaker and Khan off an engage by support Cho “BeryL” Geon-hee got DK their first kill of the game. But the Chinese underdogs were undeterred, and a focus on building up Flandre’s Kennen and targeting Khan’s Graves gave EDG the momentum they needed to win an all-important mid game teamfight and get within one dragon of the Ocean Soul. DWG KIA then pulled off a Hail Mary play at 27 minutes with a two-man Baron sneak that gave DK a way back into the game.

The comeback lasted about a minute, though. EDG claimed the Ocean Soul thanks to a clinical flank by Flandre, and after picking up the ace, Edward Gaming won yet another crucial objective fight at the Elder Dragon, took a second Baron at 38 minutes and went on and claim the Worlds 2021 title.

The Worlds 2021 victory is the third Summoner’s Cup for China in four years. Flandre finished Game 5 at 4/1/7 on the Kennen, and Jiejie wrapped up his first world championship with a 2/3/10 performance on Xin Zhao.