DRX continue to defy all odds, defeat Gen.G to advance to Worlds 2022 finals

DRX continue to defy all odds, defeat Gen.G to advance to Worlds 2022 finals 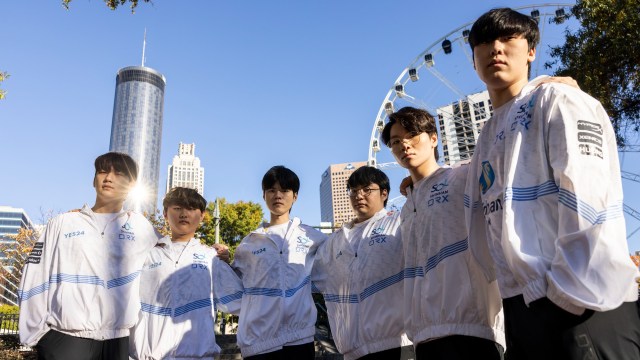 DRX has had a Cinderella run for the ages coming into their unlikely League of Legends Worlds 2022 semifinals matchup against the tournament favorites, Gen.G. But like many fairy tales, DRX’s one was simply unreal. However, we are living in the wildest timeline as DRX continued their miracle run with their upset over Gen.G in 3-1 fashion to qualify for the Worlds 2022 finals.

Gen.G came to play in Game 1. With the team grabbing an early lead, the juggernauts of Worlds 2022 stepped all over DRX. There were really no redeeming things from the DRX squad as Gen.G dumpstered the underdogs to take an easy 1-0 lead. It seemed that DRX’s run was too good to be true. But just like every game before this one, do not count out DRX.

After getting stomped in Game 1, DRX tried to switch up their draft in a big way. Picking four champions that have not seen much play at Worlds 2022, DRX tried to trip up Gen.G in order to find some momentum. After a risky early game dive in the bot lane, DRX not only didn’t get any kills, Gen.G were able to turn around and get first blood themselves which spelled disaster in the early game.

But credit to DRX — they managed to mitigate the impact and kept the game close through the 30-minute mark. With the game on a knife’s edge, DRX found a fight around the potential Infernal Dragon Soul with a clutch play by the phenom Kim “Zeka” Geon-woo. With Baron and Infernal Soul, DRX took a commanding lead. And with Gen.G forced to take a sub-optimal fight around Elder Dragon, DRX utilized their lead to wipe Gen.G off the map as DRX tie up the series 1-1.

Listen in as @DRXGlobal book their ticket to the #Worlds2022 Finals! pic.twitter.com/RTG7A906Ag

If there is one thing DRX has proven this Worlds is that when they get ahold of momentum, they know how to play with Swagger, DRX were certainly feeling themselves in Game 3 and they continued to surprise everyone, especially the players not named Kim “Deft” Hyuk-kyu and Cho “BeryL” Geon-hee. Zeka was a monster on Akali, Hong “Pyosik” Chang-hyeon popped off on Viego and even Hwang “Kingen” Seong-hoon got fed on Ornn. DRX had a 7k gold lead before the 30-minute mark. Behind another career-defining game by Zeka, DRX put Gen.G on match point.

Game 4 did not disappoint. With both teams leaving it all on the rift, DRX carried a 2k gold lead into the Ocean Dragon Soul fight. DRX won the fight, got dragon and the upset was no complete. DRX pull off one of the greatest upsets in the history of the game.

Gen.G leaves Worlds 2022 with a massive disappointment. In a year where Gen.G’s superstar mid-laner was finally surrounded by world-class talent, he still could not get the job done. But for DRX, history is continuing to be made as they have a chance to cap the miracle story against T1 live from the Chase Center next weekend.