The Esports Stadium Arlington will be operating at 50% of it's 2,500 seat capacity 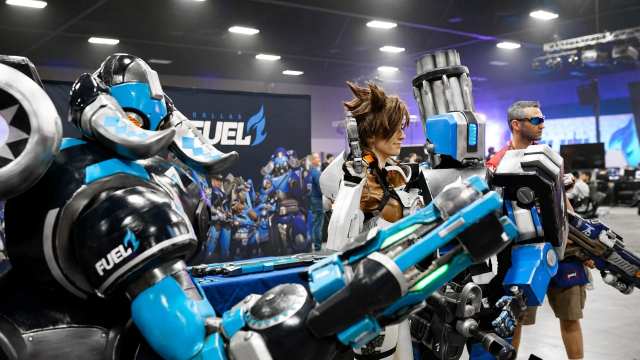 Photo provided by the Dallas Fuel Dallas Fuel fans in cosplay at a past Overwatch. The team will put on the league's first live event of the year on July 9.

The Dallas Fuel have sold out the Esports Stadium Arlington venue for their upcoming live Overwatch League event. Tickets ran out in less than 48 hours.

The Fuel will be hosting the first LAN Overwatch event in over a year, as the world slowly recovers from COVID-19. Fans leaped at the opportunity to attend an in-person event and quickly bought out all of the available tickets.

The tournament will take place on July 9 at the Esports Stadium in Arlington, Texas. That venue has already seen some activity as the esports industry moves back towards live events. They are currently hosting the Stage 4 Major for the Call of Duty League, put on by the Fuel’s fellow Team Envy franchise, the Dallas Empire. However, that event did not allow for fan attendance like the upcoming event in July will.

The Texas-based Dallas Fuel are one of 20 teams currently competing in the 2021 season of the Overwatch League.

The Esports Stadium will be operating at 50% of it’s 2,500 capacity, housing over a thousand fans for the event. While the overall number isn’t exactly monumental, it’s a big step for the Overwatch League in getting back to the packed audiences seen prior to the pandemic.

Other esports titles, like League of Legends and VALORANT, have also begun bringing players back into the studio. After over a year, esports seems right on the cusp of normalcy.

we can’t wait to see all of our friends again july 9th!
see you then at battle for texas! 🔥💙 pic.twitter.com/czOLYqQNGB

Fans attending the Esports Stadium in Arlington will be able to watch the day’s first two Overwatch League matches via live stream on the venue’s big screen. The Dallas Fuel players will then take to the stage at 5 p.m. to battle their in-state rivals, the Houston Outlaws. The Outlaws, as a result of scheduling and travel conflicts stemming from their match with the Boston Uprising the day prior to the event, will not be physically present in the arena. Instead, the Fuel players will be live on stage alone and will battle the Outlaws remotely.