C9 and CLG went to war in the first round of the 2022 LCS summer playoffs showcasing unorthodox champions and back and forth gameplay. 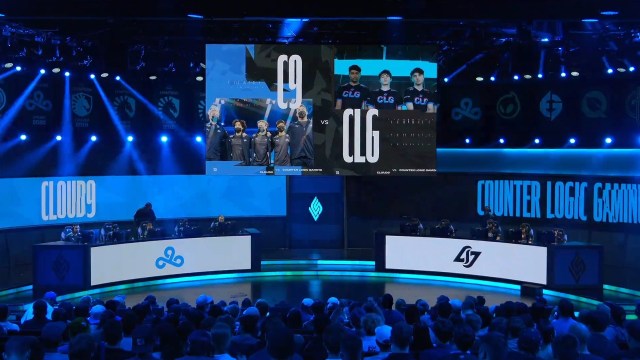 Screenshot via LCS Twitch It was close but C9 were able to move past CLG to set up a matching against EG.

Although the fourth and fifth seeds going to battle would inherently indicate a close series, many didn’t think the match between Counter Logic Gaming and Cloud9 would be close. In fact, the fourth-seeded CLG were the massive underdogs heading into the first round of the 2022 League of Legends Championship Series summer playoffs. But after a five-game barnburner, CLG and C9 were evenly matched. It took all five games for the favored C9 to take the win in a series that not only showcased crazy gameplay but crazy champion selection.

Both teams threw the kitchen sink at each other with unorthodox picks dictating the entire series.

Cloud9 vs. CLG go back and forth in LCS Summer Playoffs match

Game 1 was decisively C9’s. With CLG picking a relatively standard comp with a standard bot lane combo of Sivir and Renata Glasc, C9 countered with Kalista and an Ashe support pick for Jesper “Zven” Svenningsen. The bot laner turned support decided to use a bot lane champion as a support and it paid off big time. Of course, the former bot laner felt comfortable on one of his most played champions historically and with a 3/1/14 KDA, C9 started off the series with an expected result.

But Zven once again picked something off-meta in Game 2 deciding to pick Ammumu. Unfortunately for him, CLG’s mid-laner picked up Sylas, a champion that can do Amumu’s job better when he steals Amumu’s Ultimate ability. To mitigate Sylas’ impact, Zven decided to prematurely activate Zhonya’s Hourglass before fights in order to take Sylas’ playmaking potential away. But it did not matter, CLG were able to win every fight late game and tie the series up one a piece.

C9 got back on track in Game 3 with an oppressive combo of Nocturne, Oriana and Kennen. The three champs in conjunction kept CLG guessing the entire game not knowing where Kennen would come from and having Nocturne and Orianna keeping the team in place. C9 moved onto match point going into Game 4.

With their backs against the wall, CLG had a chance to first pick Azir for the arguable best Azir player in North America, Cristian “Palafox” Palafoxbut instead decided to give their jungler Juan Arturo “Contractz” Garcia priority with a Poppy pick. But that didn’t mean that Palafox wouldn’t get a comfort pick.

Through some ankle-breaking in the late stage of the draft, CLG picked up the duo of Akali and Yone, two champions that can either be played in the Top or Mid lane. And with C9 forced to guess, CLG made sure that their top laner Niship “Dhokla” Doshi and mid-laner Palafox got their optimal matchups. The two players didn’t disappoint on the Assassins as they combined for a 12/3/11 KDA in Game 4 to move the series to an all-deciding Game 5.

C9 drafted a standard composition with their mid laner Nicolaj “Jensen” Jensen picking up the hyper carry LeBlanc blindly which allowed CLG an opportunity to use their final pick to give Palafox a winning matchup. Instead of going for the standard Leblanc counters of Lissandra or Malzahar, Palafox locked in Vex, a champion that has not been picked in the mid lane in the LCS all split according to Gol.gg. Putting their winner’s bracket dreams on the line, CLG’s faith in Vex was not rewarded. The game was close but it was Leblanc and C9’s bot lane that were the difference makers as C9 fended of CLG 3-2.

C9 will not likely go up against the top-seeded Evil Geniuses with a spot at Worlds 2022 on the line. CLG will play against Golden Guardians in the losers bracket.