Cloud9 and Zven are putting other LCS bot lanes on notice

Cloud9 and Zven are putting other LCS bot lanes on notice

While EG is at the top, Zven believes he and Berserker have what it takes to be NA's best bot lane 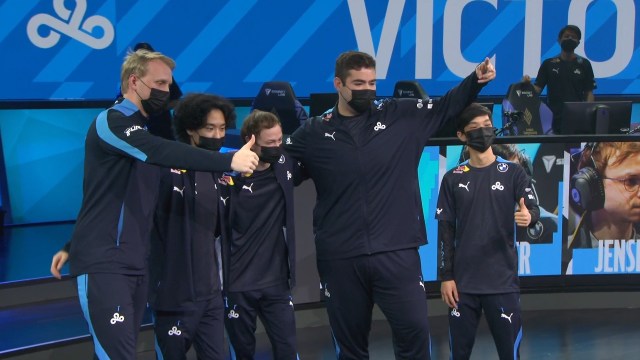 Screenshot via LCS Twitch Zven os happy with his play so far, but is always looking to improve.

The League of Legends Championship Series is in the middle of a revolution. As Evil Geniuses takes over the league with a mix of veteran and young talent, the rest of the league is now playing catchup. Essentially, the old guard like TSM and Cloud9 are in the middle of an adapt-or-die situation, and it’s not just the organizations either. As the 2022 season enters the dog days of summer, the old dogs will need to start learning new tricks.

Cloud9’s Jesper “Zven” Svenningsen has spent the majority of 2022 grinding in Academy and Champions Queue after C9 decided to take a big risk on the roster former head coach Nick “LS” De Cesare built at the beginning of the year. But after the experiment failed, C9 made sweeping changes heading into the summer; and with a spot open on the main roster, Zven rose to the occasion, but not in his normal role.

I would be such a good support, just imagine my CSD?

The LCS has seen bot laners turn into world-class support players before; Jo “CoreJJ” Yong-in was the bot laner for Dignitas before winning Worlds 2017 as the starting support for Samsung Galaxy; and, of course, Zaqueri “Aphromoo” Black was an old-school bot laner who transitioned to — and made a career out of being — one of the greatest support players in LCS history. Zven is following a similar path, as he believes the skill set of a bot laner transfers over nicely, but he still has a new perspective.

“I think I care a little less about how strong my lane matchup is, I don’t care if my ADC is down 10 CS if he’s scaling but as an ADC you probably care a little more,” Zven said. “You have to think a lot more about where to go and when to be where and what you can do.”

Due to visa issues plaguing C9’s bot lane, the team suffered their worst start to a split ever, going 0-3 before Zven and Kim “Berserker” Min-cheol joined the team for Week 2. Since then, Cloud9 has gone 4-2 in games and have moved their way into the playoff picture. While the team has kinks to work out, Zven is content with his performance so far despite only playing as a professional support player for a couple of weeks.

“I’m in the right spot at the right time and you know these things I’m very happy about, I’ve been playing well in that sense,” Zven said. “But mechanically I’m behind on some champions, I don’t have time to practice all champs every single game I play, but I think so far I’m happy with my performance.”

In Zven’s six games as a support player, he has played five different champions ranging from enchanters like Lulu into engage picks like Amumu. However, he did say that he enjoyed playing Tahm Kench the most because when paired with Senna, he gets to do the farming. But overall he said that the role is very rewarding while also being a blast to play.

With Zven enjoying his time in a new role, he said playing with his bot lane duo Berseker has also been enjoyable.

“He’s very easy to work with as a player; he’s very calm and collected almost always,” Zven said. “The language barrier is obviously there … but it’s something that we slowly will overcome and the better it gets the easier it gets to communicate both in-game and outside the game.”

Even though the duo has only played for a few weeks together, Zven thinks that the C9 bot lane is already one of the best in the league. However, there is a clear top dog that Zven is aiming for as Cloud9 gears up for the second half of the split.

“The only bot lane right now performing well is EG’s bot lane, the rest are very inconsistent us included,” Zven said. “100 Thieves, they play shit like Senna Yasuo and they just do nothing the whole game and lose because they play in scrims and look good, for TL I think [Steven “Hans Sama” Liv]  has been very very bad for a while now — very uncharacteristically, I should say — compared to how good Hans Sama and CoreJJ should be as a duo, so I think right now Berseker and I are right up there with the rest.”

As for his reflection of the split so far for Cloud9, he is mad at the two losses he was a part of, but knows that Cloud9 will be near the top, come playoffs.

“I think that in both losses our comp was kind of one-dimensional and had a lot of flaws, we should have been 6-0,” Zven said. “We’re still, in my opinion, a top three to four team battling out with EG TL and 100 Thieves.”

“I feel very comfortable with the progress we’re making; it’s not about what the split looks like now, it’s about the destination come playoffs … we will be in our final form, and I think that’s a form that I’m very confident in.”