It was a party in every sense of the word 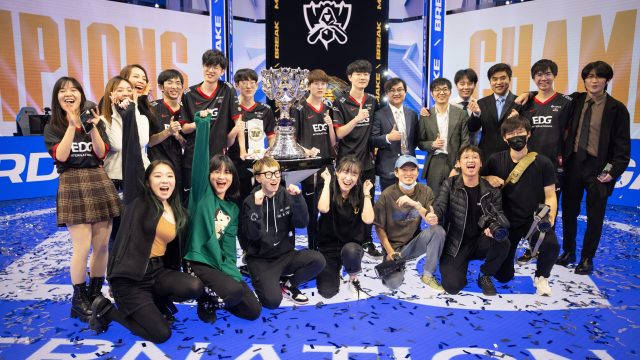 Photo by Colin Young-Wolff/Riot Games Edward Gaming pose with the winner's trophy after winning the League of Legends World Championship Finals on November 6, 2021 in Reykjavik, Iceland.

The League of Legends Pro League’s Edward Gaming have won the 2021 League of Legends World Championship. Immediately after the Chinese first seed took down South Korea’s DWG KIA to complete the 22-team gauntlet that was Worlds 2021, fans of the team erupted in wild celebration.

From parades of fans flooding the streets to ridiculous antics like shaved heads and swirlies, EDG’s big win came with a little bit of everything.

Edward Gaming fans parade in the streets after Worlds 2021

Laurent replied to that tweet with an even more colorful scene: a band of Chinese fans rushing down a public street lead by a (mostly) unclothed flag-bearer.

An alternate angle of that shot showed the same group of runners before they rounded the bend.

The party rages on pic.twitter.com/4Ihuru1PKr

Meanwhile, thousands of the LPL’s college fans gathered on their dorm balconies to chant for the World Champions.

There were even mini motorcades to broadcast the public service announcement that EDG had won Worlds 2021.

The speaker is playing:
EDG won the championship
EDG niubi
on repeat pic.twitter.com/4YyODKMl8z

But the scene behind the scenes got quite a bit wilder.

Chinese fans deliver on “What if EDG won?” bets

According to Twitter user @ran_lpl, who follows the Chinese League of Legends scene closely, and our own Tyler “FionnOnFire” Erzberger, one of the big things among the LPL fanbase were betting challenges. Many fans essentially committed to going through with crazy antics if Edward Gaming ultimately took down DWG KIA in the Worlds 2021 finals.

I’m seeing videos of people:
Running naked on the streets
Washing their head in the toilet
Washing their hair while standing upside down while being naked
Running in hundreds on school campuses
…

Some of these fans committed to shampooing their heads with cola…

I don’t even know what’s going on anymore pic.twitter.com/RUAQb6b8rF

Or even shaving their heads completely.

Now that its actually happened, fans are celebrating by actually doing what they promised pic.twitter.com/KRSwkTh5oF

Look, there were a lot of bets involving punishing your own head for some reason, OK? But not all of these organized celebrations that took place were of the wild and untamed variety.

One of the more impressive celebrations to come out of the post-Worlds 2021 frenzy saw a group, thousands-strong, gathered together to put on a synchronized light show for the world to see.