Are the Call of Duty: Modern Warfare 2 servers down?

Are the Call of Duty: Modern Warfare 2 servers down? 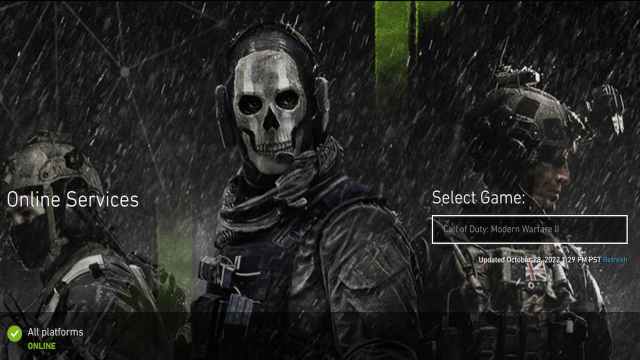 Screenshot from the Activision Support website. This page will have all of the information that players need about the Modern Warfare 2 servers.

As of writing, Call of Duty: Modern Warfare 2 is finally available to all players worldwide. All any fan needs to do is purchase, download and install the game to get into Infinity Ward’s latest addition to the franchise. Unfortunately, as with any massive game launch, it can sometimes be difficult to log in and play; with thousands of people all around the world all trying to access the same servers, online games can sometimes get overloaded and crash. Luckily, most developers — including Infinity Ward and the game’s publisher, Activision — have systems in place to let players know when their servers are down. Anyone looking to find out how they can check if the Modern Warfare 2 servers are up can read below.

How to check the Modern Warfare 2 servers

There are several easy ways to see if MW2’s servers are down; it just depends on how much effort you want to put in. Don’t worry — either way, it will be easy and straightforward.

The first (and easiest) is to follow the official Activision Support and Infinity Ward Twitter accounts. As Infinity Ward is the main developer on the game, the quickest public updates will usually come from their account. They have already tweeted several times about errors that players are facing in their new release.

We're aware of some players experiencing crashes when partied up. Please stay tuned as we investigate the issue.

Players looking for more up-to-the-minute news on the Modern Warfare 2 servers can go to the official Activision support website. There, anyone looking for server updates can find them for Modern Warfare 2 and any other online games Activision publishes. Here, Activision support staff will be able to immediately and easily provide updates on the current server status to players. Make sure the dropdown menu on the right side of the screen has the right game selected, and any issues with the Modern Warfare 2 servers should be visible on screen. If the servers are all good, the message will simply say, “All Platforms: Online.”